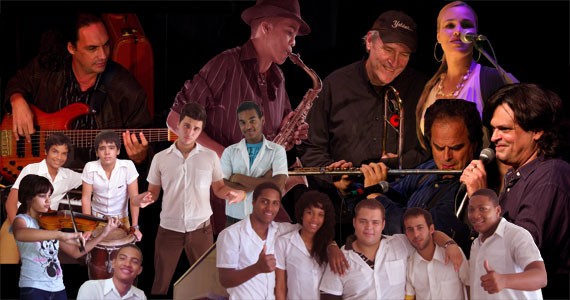 Los Primos began in 1997, with Amara and Jeff Goodspeed's wish to provide instruments to young musicians in Cuba and promote a cultural exchange. Since those early days they've not only donated more than 250 instruments, but the project has become synonymous with Cuban music in Nova Scotia.

This weekend, the ever-changing Los Primos is back on the Jazz Fest stage. The 17-piece multi-generational band features professional musicians from Nova Scotia and Cuba, including tenor Augusto Enriquez and his wife, professional singer Yami Casanueva, their daughter, 11-year-old Alison Enriquez---herself a violinist and singer---and young music students from Cuba. Goodspeed says that this year's incarnation has the students becoming the teachers by "demonstrating the development of Cuban music from its classical beginnings to modern day salsa and Latin jazz."

This will also mark the second time Enriquez has been in Halifax, the last was at last fall's Havana Nights fundraiser for the Los Primos project. Enriquez took a break from his all-star tenor lifestyle (and hanging out with his buddy Luciano Pavarotti) to experience Halifax's take on Havana, and judging by his decision to return again so quickly, it made an impression. Which is nothing out of the ordinary, the musicians that the project brings to Nova Scotia always seem to want to return to "the people, and the beautiful countryside," Goodspeed says.

"The Los Primos project gives students a wide variety of experiences in a short time and they form strong bonds of friendship between students that are involved---Cuban and Nova Scotian---and the families that they stay with while they are here. The professional Cuban musicians who work with Los Primos are world travellers and they like to return to Nova Scotia because they recognize it as a piece of paradise that doesn't exist in other parts of the world."

Not to toot our own trompeta china or anything, because as Goodspeed points out, Cuba clearly has got it going on. "The Cuban music education system is perhaps the best in the world and it is 100 percent free. There are more opportunities for musicians in Cuba because music is such an integral part of Cuban life and society," he says. "Being a musician in Nova Scotia, you have to diversify and do many different things to have a musical career."

Goodspeed's choice to branch out and share his love of jazz has paid dividends for himself and the students. "We are learning so much from the students. Being a part of Los Primos 2012 gives the students the opportunity to shape their craft by working within a band, learning from each other and developing their performance skills; it's a lifetime of experience in only four weeks," he says. "Past Los Primos students are now musicians who are playing around the world."

But before the experience kicks off, the opportunity needs to be there. Goodspeed is planning a campaign that will take hundreds of used instruments, repair them and make them available to music hopefuls in both Nova Scotia and Cuba. If you're still hanging on to your old trombone from high school band, this might be the good cause you were looking for. Goodspeed wants to send all of the students of Los Primos 2012 home with a new instrument. To get involved see losprimos.ca.