Prismatic preview: The exorcism of Shahin Sayadi in Asheq: Ritual Music to Cure a Lover 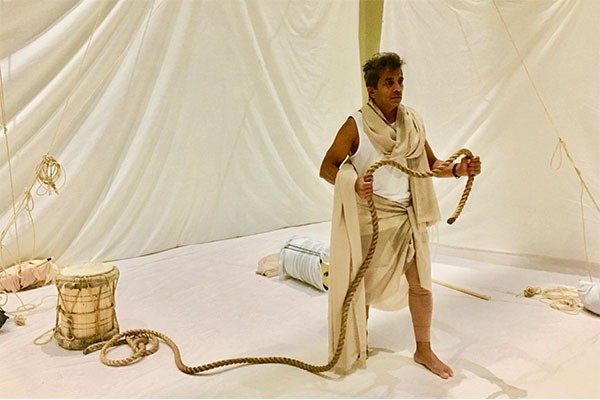 The setting is a fictional seaside village of the Persian Gulf in southern Iran, where East African and Persian traditions have blended over time to produce unique cultural practices, including the modern Zar rituals. Asheq witnesses a Zar exorcism ceremony, intended to rid a young man of the "sickness" of his love for an outcast young woman—leading to revelations of a father's buried secrets. "It's the old story between light and darkness, good and bad, and what will prevail in the end," says Sayadi.

Growing up in a theatre family and studying scenography, Sayadi's latest work is new territory even for him. Presented by his own Onelight Theatre, the theatrical impresario wrote, directed and designed the play. He'll also be the sole star.

"That aspect has been challenging because I'm directing the entire picture that's taking shape," he says. "But as an artist I'm finding it very satisfying."

Sayadi has also commissioned internationally renowned musicians Habib Meftahoushehri and Moshen Sharifian to compose original music, giving the production another dimension of authenticity. "We always create an environment that will take everyone on a journey," says Sayadi. "The whole thing takes place in a very particular ceremony that everyone is invited to come and experience."

Sayadi does want to leave the meaning of Asheq open to interpretation, encouraging spectators to arrive at their own conclusions. "I don't always try to go for any particular message with my work," he says. "I usually just try to stick with the story, and whatever message people will get from it they'll get from it."