Provided nothing major changes in terms of vaccine distribution, Strang gave the breakdown of who’ll get a vaccine when, by five-year increments. COMMUNICATIONS NOVA SCOTIA

Anyone over age 16 should be on track to get their first jab by early June.

But this morning’s PowerPoint presentation–from chief medical officer of health Robert Strang and Tracey Barbrick, the associate deputy minister of the department of health and wellness–gave more information than ever before. This includes a long-awaited breakdown of who will get a vaccine based on five-year age increments. 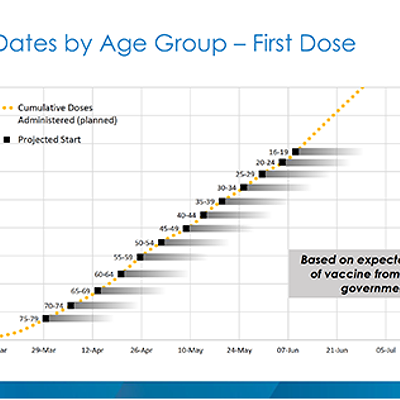 By early May, Strang said, there will be over 86,000 Nova Scotians, or about one age group, getting vaccinated every week. “We’ve gotten good and now we’re going to get fast,” said Strang told the public at Strankin’s standard C19 press conference later in the day.

To date, the province has received about 119,000 doses–between the Pfizer, Moderna and AstraZeneca vaccines–from the federal government’s allocation. But by the end of March, it’s expected 81,000 more will be added to that. And by the end of April, another 182,000.

By the time Quarter 2 of the vaccine rollout ends in June, the province is expected to receive about 801,450 total doses, according to its data, reaching that crucial level of around 70 percent of the population protected by at least one dose of vaccine. “Our overall goal is to build a high level of population immunity against COVID-19 as fast as possible,” Strang said Tuesday.

But that target in June will only end the first half of the province’s vaccine plan. The second half will be getting everyone back for their doses in 16 weeks, meaning full vaccination will be achieved sometime in fall 2021. Strang said it’s important that people prioritize their vaccine appointments over other commitments like travel and family plans this summer, because vaccine windows will be small.

Once 70 percent population immunity is reached, Strang says he doesn’t yet know what will happen, but he’s aiming for even higher. The top doc revealed that the provincial data modelling from the technical briefing is based on “very optimistic” uptake rates of 90 percent, meaning nine out of 10 people are willing and able to get vaccinated.

Related How to sign up for your COVID-19 vaccine: Whether it’s almost your turn or you’re helping an elderly relative sign up, here are the 5 things you need to know.

How to sign up for your COVID-19 vaccine
Whether it’s almost your turn or you’re helping an elderly relative sign up, here are the 5 things you need to know.
By Victoria Walton
COVID-19

Strang said polling predicts Nova Scotians will have an actual uptake of between 70 and 80 percent, but officials from public health have big plans for public education around vaccines over the next few weeks, in addition to the information already available online.

“Our target is at minimum 70 percent. As we get more vaccine supply we’re going to be rolling out a robust communication strategy talking to Nova Scotians, making sure they have good, accurate information,” Strang said. “A key piece of breaking down vaccine hesitancy is making sure that vaccine is very accessible to people.”