"If people feel uncomfortable I don’t mind that." 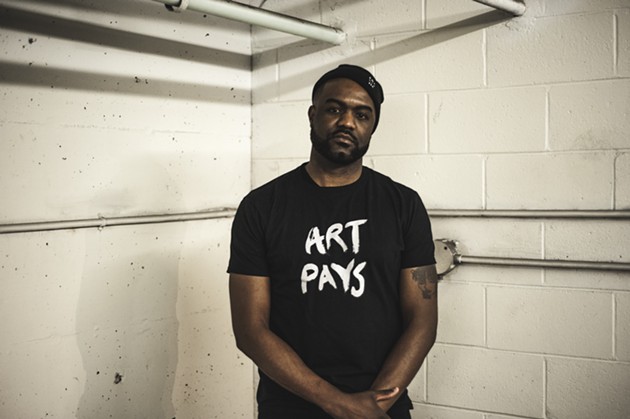 Jones has been making conversation-starting streetwear under the label Art Pays Me for years, but this Saturday he’s trying something new: His first solo fashion show, a high-concept project titled Moments In Culture, that sees a departure from pieces like his WuTang-inspired t-shirts. Here, he sits down to talk about the creative process and high fashion.

Tell me the story of the name of your label?
“I grew up being told that being an artist isn’t necessarily the career path to go on, and then at one point, I started to believe it myself. But then I started seeing these artists who were able to make money while still staying true to their artistic vision. There is a way you can do both and Art Pays Me is about finding that balance.”

The name of your first solo show is Moments in Culture, what does that mean?
“When we first thought of the name of the show, I had two or three moments where I was like ‘I wanna design around these.’ Like for instance, we’ve started to step back and appreciate we’re on Aboriginal land. I’m addressing that in the show and some big media things that happened.”

How do you take something like realizing we’re on Indigenous land and turn that into something visual, specifically clothes?
“I just spit it out in my sketchbook. Here, I’ll show you..."

"More of my thinking is this is less of a fashion show and more of an artistic thing. This is me being able to depart from [t-shirts with logos] and just say ‘Look, these are some things on my mind.’ I might not even sell them after the show, I just wanna put this out there.”

This show feels more like conceptual haute couture versus your typical streetwear looks. Does streetwear ever feel limiting because it needs to be more wearable?
“I find it is a hard thing to stand out in because I don’t have technical sewing skills. I have a lot of insecurity around describing myself as a fashion designer. I feel like I’m a graphic designer whose medium is clothing. It is definitely limiting, but it's a challenge I enjoy because I know I have to work within the parameters of a t-shirt and make something that’s interesting but that people can grasp by just walking by.”