Emily Rideout inside the Copenhagen talks

The inside scoop from an NGO worker in Copenhagen. 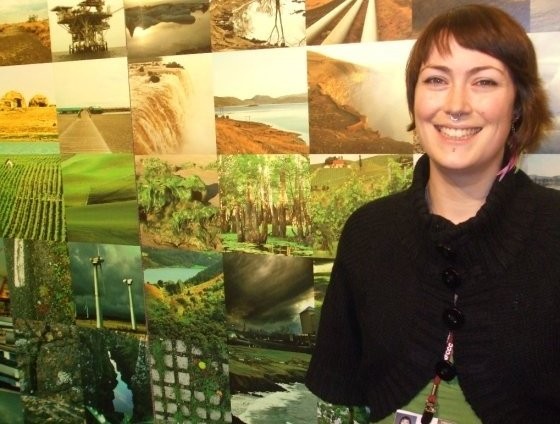 Emily Rideout, who is representing Sierra Club Atlantic in Copenhagen, graciously provided detailed answers to my questions on her experience there, and what she is witnessing from inside the conference:

Q. Is this your first experience at an international conference of this nature?

A: No, I represented Sierra Club Canada at the UN Climate negotiations last year in Poznan Poland

Q. What did you do to prepare for the experience?

A: Participating in the Poznan COP helped me be more prepared this year, to feel more comfortable with the day to day routine, the multitude of UN acronyms and my role within these negotiations.

I’m studying Environmental Science at Dalhousie so I often try to tailor my assignments to address issues related to the negotiations or attend relevant guest lectures in Halifax. I’m also very active within the Dalhousie and Halifax environmental community and have learned a lot from my peers.

Q. It must be quite a rush to be there. I hear there are often sleepless nights. What is the energy like?

A: Sleep deprivation is a common theme at the negotiations. NGO delegates work tirelessly to convey the progress of the negotiations to their constituents back home. Four hours of sleep per night is common.

The energy here is tense; it’s both an excited and stressful tension. There is so much to do in a day that we’re all very busy trying to track all of the developments as they happen, but we’re also energized by many of the powerful actions, statements and protests that happen several times a day, particularly from youth and delegates from nations that are already threatened by the effects of climate change.

Today I saw an amazing Pan African solidarity action where delegates from almost every African country made a statement while others chanted and danced. Shouts of “One Africa” and “2 degrees suicide” can give even the most jaded delegates chills. I also participated in a Canadian Youth Delegation action which involved a large banner saying “Stop Tarring Our Image”, a reference to the Alberta Tar Sands.

Q. What role are the Sierra Club reps playing there? Do you feel like you have much of an influence over proceedings and outcomes?

A: The Sierra Club team’s mandate in Copenhagen is to inform Canadians back home about Canada’s position here and our progress (or lack thereof) within the negotiations. Many Canadians are unaware of the negotiations or are unclear as the significance of developments or outcomes of the talks. Our goal is to provide Canadians with the information they need to apply pressure on the federal government so that change can come from within.

We hope that we are influencing the negotiating position but I think that the negotiators have their marching orders from the federal government; they’re just mouth pieces so our influence is limited. Nevertheless, it’s important for Canadian ENGO’s to make their voices heard in these negotiations. We can't just sit back and be silent.

Q. What kinds of strategies and tactics are environmental groups using in Copenhagen to assert an influence?

A: It really depends on the group. The more experienced climate analysts from Canadian ENGO’s like the Pembina Institute, Greenpeace, KAIROS and the David Suzuki Foundation prefer to meet with the Canadian Delegation and politicians as well as to connect with media back home.

Youth and indigenous groups tend to go for a more action based approach and put on daily visually stimulating protests relating to key developments within the negotiations or key issues back home such as the tar sands, funding cuts to renewable energy and Bill C-311. Youth can be more direct and appeal to delegates on an emotional level because they are non partisan and have no vested [financial] interests in the negotiations. They’re not business people who have financial stakes in the outcome of these talks. They do however have a vested interest in their futures.

Canadian NGO delegates have more at stake like their credibility or funding in some cases so they take a more diplomatic approach. One thing both groups have in common is that fact that we all want to let people back home know what is going on here in Copenhagen; to let Canadians know what our elected officials are negotiating on our behalf.

Q. Is there much of a chance for nonprofit folks to interact with business and government folks? When that happens is it a tense encounter or is it more of a bridging experience between perspectives?

A: As I mentioned, both youth and NGO’s represented by the Climate Action Network Canada usually get several opportunities to meet with Canadian politicians. These meetings are usually very interesting and the atmosphere of course depends on who we’re meeting with. When we meet with environment critics, they are usually supportive of our demands. Meetings with Jim Prentice and head negotiator Michael Martin are tenser, mostly because many people are trying to bite their tongues and be diplomatic; it’s a bit like a fencing match.

Q. Who are the most interesting people you've met there and what have you learned from them?

A: It’s only been three days, but so far I have been most impressed with the Canadian Youth Delegation—-I can’t speak highly enough of them. The 35 person delegation is made up of 18-26 year olds from all across the country. These guys are so brilliant; they understand all of the nuances of policy developments, they pull off clever and powerful actions and get great media response. They are doing an amazing job at drawing attention to the poor job that the Canadian government is doing.

Q. The Harper government seems particularly oblivious and impervious to popular opinion on this issue. Are you optimistic about the outcome in Copenhagen, and the chances for Canada to restore its damaged international image? And is it hard to stay positive?

A: At this point it would take a miracle to restore Canada’s tarnished international image. The Canadian government has completely refused to be a constructive participant in these negotiations: Our target is one of the weakest in the world (3% below 1990 levels by 2020), we have no plan whatsoever for achieving even this small target, we’re trying to scrap the Kyoto Protocol and create a brand new treaty which would not be based on Kyoto (which took years of negotiations to achieve) and which would not be legally binding.

It’s extremely hard to stay positive. I keep vacillating between utter despair and resignation, and the hope that something will happen in Copenhagen, back home or anywhere in the word, that will make the Canadian Delegation finally understand all that we have to lose and make them adopt a science based target. We can fight climate change, and transition to a green economy that provides non-polluting jobs for Canadians and the only price is one year’s growth in the economy. Compared to the cost of inaction on climate change, I’d say that’s a bargain. The only thing lacking is political will and it’s so frustrating that this is the only thing it comes down to.

I’m not optimistic that we’ll come out of Copenhagen with a complete deal, more likely we’ll get the "political agreement" that heads of western states have been talking about, but I am optimistic that we can hammer out a deal in one of the intercessional rounds of negotiations in 2010.

Q. This conference has been described in somewhat hyperbolic terms. What is its real significance?

I wouldn’t call it hyperbolic, I’d call it accurate. There are two reasons why this conference is so important:

1. The climate treaty that is being negotiated in Copenhagen will cover the period from 2012 (when the Kyoto Protocol expires) to 2020. This is also the period in which global CO2 must peak and then start to decline by 2015 or 2020 at the latest if we are to avoid a 2⁰C increase in global temperatures. 2⁰C is the level that constitutes “dangerous” levels of climate change (although many developing countries argue that 1.5⁰C is too much).

2. It generally takes several years for an international treaty to be domestically ratified. In order for this climate treaty to kick in by 2012, we need to create it this year. If we wait then we’ll have what’s called a “gap year” wherein no legally binding treaty would exist for the year 2013, 2014 or for however many years it takes us to ratify the deal.

Beyond these two reasons, a legally binding climate treaty needs to be agreed upon this year in Copenhagen because climate change threatens the ability of humanity to exist on this planet. This may sound like a lofty and dire proclamation but it’s the bottom line.

Q. You blogged about how Tuvalu has stolen the show with its insistence on a discussion about making any agreements legally binding. What is the feeling among the most industrialized nations toward Tuvalu right now?

A: They are somewhat divided. Some developed countries, while not pushing hard for legally binding agreements are not opposed (progressive EU countries) and therefore range in their support for Tuvalu from very supportive to indifferent, while others, such as Canada, are working hard behind the scenes to make sure that this process is not legally binding, and that Kyoto is killed off, and therefore do not support Tuvalu’s proposal.