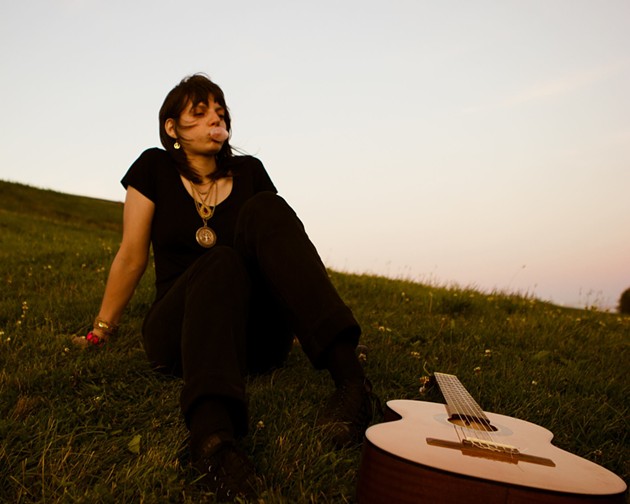 Last month, Halifax singer-songwriter Cactus Flower (Jess Lewis) released her first full-length, Magic Hour. It's an album that was years in the making but completely worth the wait.

Splitting her time between several projects — as a harmonious vocalist in Dark for Dark, as a technician in Halifax theatre productions, as a player in three other bands — Lewis was patient in creating Magic Hour. As a result, her collection of psych-folk inspired tracks showcase her deep smokey voice, her interests in narrative and storytelling and the like-minded musical chops of friends who perfectly complement such poetic and moving songs.

Tonight, Cactus Flower plays The Seahorse with Halifax flange-rock gods Monomyth and Walrus ($10, 10pm). It'll be an experience that channels one of rock and roll’s most exploratory eras: harmonic combinations, exotic tones and colourful emotions. Have you ever been experienced? Are you feeling groovy, baby? I'm feeling groovy, baby.

Q: "China Blue" came out in 2012. When did you start recording Magic Hour?
A: Most of the songs on the album have been around for awhile now. Since Cactus Flower is my own project, it means I’m the only one to motivate myself and make it all happen. “China Blue” was probably one of the first things I wrote that I made into a complete song and that I was willing to share with people. I may have started “China Blue” as long as eight years ago! But I think it just took until last summer to really get the full-album ball rolling. Let’s say the stars finally aligned. The songs on Magic Hour are some of the first songs I wrote and I think they fit well together.

Q: You've got a strong psychedelia vibe. What appeals to you about '60s sounds?
A: I don’t know what it is that appeals to me about the ‘60s sounds so much. But music from the ‘60s and ‘70s has always been my favourite. The bulk of what I listen to comes from that era. Of course, what I listen to is going to effect what I create. I tend to write more folky numbers and I wanted to find a way to get things a bit more rockin’, and throw in splashes of that ‘60s psychedelia where I could. Really, I wanted to make an album that I’d listen to.

Q: Tell me about the musicians you worked with on the album?
A: That choice was a no-brainer. I am very grateful I got to make the album with some of my best pals. I’ve been playing music with Levon (Campbell) and Dave (Ewenson) for years. Evan (Cardwell) is a great bass player and a great person. We all have similar tastes in music so I knew they’d get what I wanted to go for. I knew it’d be a fun and easy recording environment. Plus, I literally paid for their time in booze and burritos so it was a real sweet deal.

Q: When exactly is the magic hour?
A: I wanted a title that rhymed with Cactus Flower and Magic Hour worked in a number of ways. I think it’s a really nice looking time of day, when the sun is just setting and the light starts to change. The colours get rich and lovely and everything seems to glow. I also liked the idea of the album being ‘Cactus Flower’s Magic Hour,’ as in, an hour of music that’s actually only 34 minutes long. I thought that was pretty funny.

Q: I think my favourite track is “Lady and Red,” it’s so wavy — Hawaiian slides, sweet wordplay, a love story. Those parts feel important, and very country and western.
A: I find writing the lyrics the hardest part of songwriting. I feel like I try to avoid writing love songs. I’m certainly not interested in writing about anything too personal. I prefer to write about situations or funny characters. I do consider “Lady in Red” a love song, but as a cute little fictional story. And the lyrics to “Lady in Red” were inspired by the lyrics in “The Diary of Horace Wimp” by ELO. But the songs aren’t really similar, except about sad lonely people getting married. “You Messed Up” is meant to be a hurtin’ love song, in a country and western way. But most of my songs are about cats and dumb things like TV characters. Maybe I’m good at making it all sound more poetic than that.