A look back at the Round of 8.

Miroslav Klose and the Germans are the talk of the tournament

We are one day away from the World Cup semi-finals and it's a perfect time to reflect back on the quarter-finals. 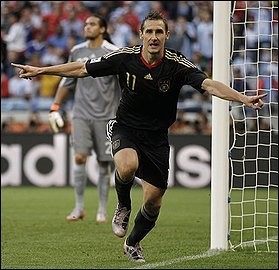 Undoubtedly, the most impressive team of the World Cup thus far has been Germany - scoring a total of 13 goals and conceding just 2 in the 5 games that they've played.

After thrashing (controversially) England in the quarter-final; not many believed that Germany could put up the same performance against an Argentinian team that contained World player of the year Leo Messi along with one of the most potent attacks the World of footy has to offer.

If there was ever any doubt, it's been erased now. The Germans managed to top their quarter-final performance by completely outclassing Argentina in a 4-0 triumph. A day that was also historical for German striker Miroslav Klose who is now just one goal away from equalizing Ronaldo's World Cup record in goals scored.

In the eyes of many, Argentina head coach Diego Maradona was the reason Argentina were unable to stamp their mark on this World Cup. He was one of the greatest players to ever play the game, but as a manager he's failed to prove that he's a great tactician. Regardless, Maradona is regarded as a saint in Argentina and he was welcomed to 10, 000 cheering fans in Buenos Aires on his return home.

The reigning European Champions have made it the World Cup semi-final for the first time in 60 years after defeating Paraguay 1-0 in 'unconvincing' fashion.

David Villa scored the winning goal in the 83rd minute in one of the most dramatic games of the World Cup. There is no question that the Spanish team that won the European Championships in 2008 has failed to show up so far. The reason that they have made it to the semi-finals has been due to individual brilliance and a bit of luck. With Fernando Torres seriously having a horrendous tournament, Spanish coach Vicente Del Bosque continues to start him. Coincidentally, when Torres is subbed off every match Spain end up scoring, and they actually start looking like champions again. If they are to beat Germany in the semi-finals, Del Bosque better seriously start to consider benching the off form Torres.

This match containted one of the of most dramatic sequences this World Cup. Youtube worthy:

And just two minutes later Spain has to re-take their penalty:

And just for fun, here's former Spanish Coach Jose Antonio Camacho celebrating Spain's goal. And for the record, I'm sure Spanish fans wouldn't have been too upset if Spain had lost as Paraguayan model Larissa Riquelme had promised to run naked in the streets if Paraguay won.

In the other two matches in the quarter-finals, 5 time World Champions Brazil were knocked out by Holland, while Uruguay somehow managed to beat the last African nation standing - Ghana - in a penalty shootout. 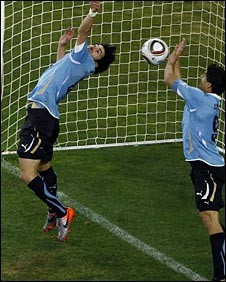 It's been a World Cup flooded with controversy and the Uruguay - Ghana match was no exception. With Ghana having most of the chances in the game, they had a final chance to bury Uruguay when they were awarded with a penalty in the last kick of the game before the dreadful penalty shoot-out. With a whole continent on his shoulders, Ghanaian striker Asamoah Gyan hit his penalty against the crossbar, which ultimately sent Ghana packing to go back home.

It was Uruguayan star striker Luis Suarez's deliberate hand-ball to keep the ball out of the net which actually saved Uruguay. It was the first time that I remember seeing a red card help a team win the game.

After the game, Uruguayan striker Diego Forlan said: "I have no word to describe Suarez but I think he is a hero. He didn’t score but he made a vital block and now we are in the semi-final,".

I suppose cheating is fine as long as you win in the end.

Gerard Pique - The most unlucky player in the World Cup.

Spain - Disappointing the World and Halifax too.