Quebec shooting has some Halifax Muslims afraid to attend mosques

“We have to realize that the anxiety and fear of going to the mosque is a reality that needs to be talked about.” 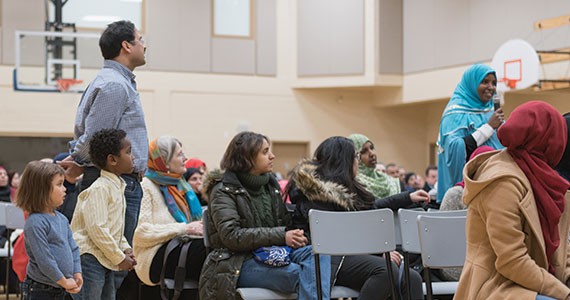 PATRICK FULGENCIO
Attendees at the Ummah Masjid’s interfaith event this past weekend.

For the sake of his faith, Dylan is trying to overcome his anxiety about going to the mosque. If he didn’t, says the Muslim revert, then “that terrorist would win.”

“But now, when people are late for prayers, you hear the door open and someone is coming in fast and it is extremely nerve-wracking,” he says. “You can’t help but think who it is, and you’re hoping that nothing bad will happen.”

After the Quebec mosque shooting two weeks ago, some local Muslims are struggling with going to Halifax-area mosques out of fear and anxiety. Dylan, Lama and Sara are three people dealing with those fears. The Coast isn’t using their real names, to prevent themselves and their families from being the targets of Islamophobia.

“To be honest, after the shooting, I felt like this is going to happen here,” says Sara. The student and mother of three has a history of volunteering at different but says right now she won’t be sending her kids to attend any mosque events or prayers.

“I left my country, family and friends so that I don’t have to come here and fear to the mosque. I wanted to be free.”

Sara and her family immigrated to Canada in the early 2000s in the hopes of securing a better future for her kids, especially for her son who has a Muslim name.  “I don’t like what’s happing to Muslims in terms of discrimination and violence,” she says. “So I want to change my son’s name.

“I brought him here and he’s never going to go back to any Arab country, so I don’t want him to feel left out from a job or an opportunity just because of the name he has.”

Even with the current climate, Sara says that Islamophobia isn’t so bad in Halifax compared to other cities she has visited, such as Montreal or Vancouver. “It gets less friendly as you go outside of Nova Scotia.”

Lama, a university student who was born and raised in Halifax, says she loves the friendliness that’s felt in the but is still afraid of going to the mosque after what happened in Quebec.

“It just makes you feel more hopeless and scared,” says Lama, who was born to a religious family that regularly attends prayers and events at the mosque.

“This fear is experienced by a lot of people, but not many want to voice it because we are told to just trust in god,” she says. “But we have to that the anxiety and fear of going to the mosque is a reality that needs to be talked about.”

Last weekend, Dylan was one of who attended a public event at the Ummah Masjid, where Muslims and non-Muslims gathered to join together and ask questions.

“Having that dialogue with non-Muslims and other members of the community was long overdue,” says Dylan. “It’s just now that I feel the community is embracing us and the religion.”

Lama and Sara also believe more events like this past weekend’s are needed.

“I think our Muslim community need to approach the outside community even more and be more engaged,” Lama says. “We need to host more events that are open to the public.”

“We need to speak out because if we repress our true feelings, then the misunderstandings or violence will accelerate,” says Sara.