Poet Rachel Lebowitz uses poetry to keep things alive that may be forgotten, and makes you feel all the feelings in the process. 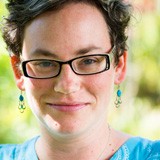 Rachel Lebowitz has been a writer on the east and west coasts and a few places in between. Now settled back in Halifax, she juggles her time between writing, raising a child and working at the Halifax North library coordinating adult literacy programs.

She originally planned on a life in academia but after completing her MFA in Montreal, Lebowitz decided to redirect her interests. "What I decided with my writing was that instead of staying in academia and doing more scholarly work, I would take those research interests I have and bring them into another field."

Her first publication, Hannus, was released in 2006 and tells the story of her great-grandmother, Ida Hannus. "She was a Finnish suffragist and socialist," says Lebowitz. "She left Finland to help be part of a utopian socialist commune on a small island off the coast of Vancouver Island." Her second and most recent book, Cottonopolis, is a portrayal of the Industrial Revolution and the ties between slavery and the cotton industry. Both books are meticulously researched poetic renderings of historical events, combining found and prose poems in an unusual mix of genres.

Although she's also married to a poet, Lebowitz harbours no highfalutin notions of the role of the poet in society; an unacknowledged legislator of the world, she is not. "There's this idea that somehow to be a poet you have to be wise," she says. "And I'm not wise. I don't know more than some other person because I'm writing poetry. I'm just trying to put the words in the best order and use them to explore ideas. But I don't think I'm coming up with conclusions. I'm not interested in that kind of wisdom."

Drawing connections rather than conclusions is Lebowitz's aim. Her latest endeavour is a project that ties together such seemingly disparate subjects as WWI, passenger pigeons and Australia's history as a penal colony. "It's more associative, so it's less about one subject than it is about connections and correspondences between different historical events." What form the book will eventually take is still uncertain, but the main goal is to uncover some of the many stories hidden within our history books. "It's important to me to keep alive things that are unknown or forgotten.

"To me what matters most is the whole Emily Dickinson definition: like the top of your head feels like it's been blown off. The emotions that you feel coming out of it is what matters to me. When I was writing Hannus I told [my editor] that what I wanted from the book was for people to love my great-grandmother. To me what it's about is love."