The correspondence course material arrived on shalan joudry’s doorstep in the spring, requested from Nova Scotia’s education system for joudry’s teenage daughter, Malaika. But it wasn’t until Wednesday night, June 16, that Malaika felt ready to tell her mom about the blatantly racist contents of the high school English curriculum she was reading. Now the course material is blowing up online after joudry posted about it on her personal Facebook account that same night.

“I had signed Malaika up for grade 10 English (correspondence NS program)... having second thoughts..... Here are some screenshots of the material..,” joudry’s post read, sharing snippets of her daughter’s provincially-approved worksheet, which posed archaic questions like: “Why are poverty and alcoholism common problems among First Nations populations?” and “Do you think all residential schools treated First Nations children similarly?” 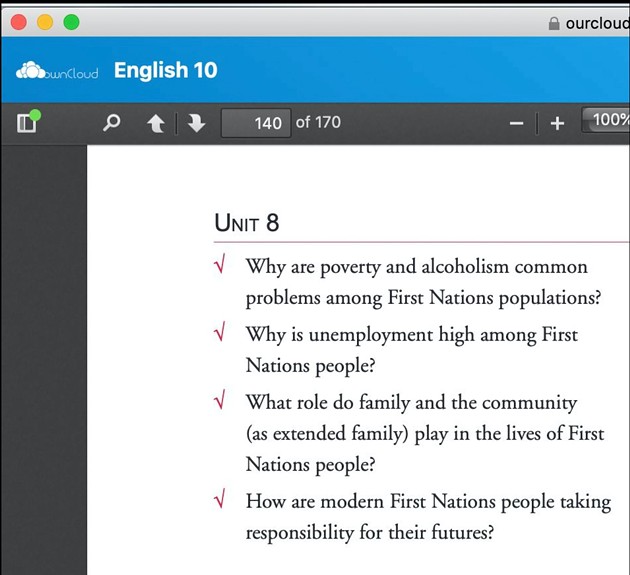 The Mi’kmaw mother says she sensed red flags about the correspondence course’s relevancy early on, when she was struggling to track down some of the out-of-date reading material required for it. But, she points out, the age of the course isn’t the problem here.

“This was sent to my daughter, and my 15-year-old daughter's eyes looked at this before I found it and she cried,” joudry told The Coast in a phone call the day after the post went live. As for the education system that produced the curriculum: “You can't just plead innocent,” joudry says. “How did it go through all these different eyes or permissions? It really just shows you that it just wasn't seen as urgent enough to go through the revisions.” 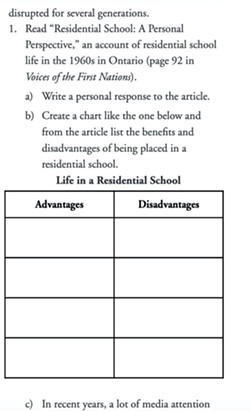 Malaika, like her mom, sensed something was off when she began reading the course material last spring. “I was already kind of expecting to see something that I wasn't going to like,” Malaika said from their home in Bear River First Nation. When she noticed the course had a First Nations section, she skipped ahead to see what it entailed. But nothing could’ve prepared her for what came next.

“I just remember the table standing out to me and I read that and I started crying and then I just had to close it,” she said, not immediately telling her parents about the questions she saw. One asked her to read an essay then “list the benefits and disadvantages of being placed in a residential school.”

“I had to give myself time to calm down, and I told myself I was going to bring it up a different day when I was mentally capable of doing so and being able to talk about it,” Malaika said. That day arrived Wednesday, when Malaika’s mom learned what her daughter had been burdened with reading just a few weeks earlier on that spring night.

“There’s four spaces to list each advantage and disadvantage [of residential schools],” joudry said. And, she underscored, “this course means there are other children in Nova Scotia who have signed up for English 10 [correspondence] who are reading this kind of material, being influenced by this kind of rhetoric.”

The timing of realizing, yet again, that Nova Scotia’s “overhauling of the education system isn't quick enough” wasn’t lost on joudry, as she pointed out how this news arrived just weeks after the bodies of 215 children were unearthed from a series of unmarked graves at a residential school in Kamloops. “It just made it so much more potent and toxic and hurtful, because I thought that we were beyond that assignment,” she said. “I assumed that all this kind of stuff was already taken out of the Nova Scotia curriculum.”

Late Wednesday night, after hundreds of eyes had seen the now-viral post, a person who had been moved to action reached out to the ministry of education and later shared a screenshot of the response from the director of curriculum.

“This material is offensive and is not currently assigned to students. It was removed from the course package as soon as it came to our attention,” Jennifer Burke starts in the emailed response. “The question is not part of our course curriculum but it was included in a course activity in the Correspondence Studies Program.”

As joudry, a local poet and storyteller, acknowledged after reading Burke’s response, this felt a bit like passing the buck. “To me that's still the Nova Scotia Department of Ed. overall curriculum, even if it’s correspondence.”

The minister of education phoned joudry Thursday morning, offering an official apology for her and her daughter. While Malaika didn’t have a chance to talk with the minister, she told The Coast that there’s still more work than picking up the phone.

“Apologies are fine. But it doesn't erase the fact that it was there in the first place and that they made no move to change anything. Because people were definitely seeing it,” she said.

“When other people around me are disgusted and outraged, I feel like we can fix this because we believe that this is wrong, and I'm not the only one who believes this is wrong.” tweet this
The Coast reached out to education minister Derek Mombourquette for comment on this story, but did not receive a response before this version went live. Jasmine Flemming, the communications advisor for the Department of Education and Early Childhood Development, told The Coast in an emailed statement that “correspondence courses are being reviewed to ensure that materials in them reflect the standards of the Nova Scotia curriculum” and that the 75 people who received correspondence courses this year have been notified that this is no longer part of the course.

“This 2003 course pre-dates the 2015 recommendations from the Truth and Reconciliation Commission and had not been included in recent curriculum renewals as correspondence courses are currently being phased out,” Flemming said in the written statement.

Thursday night joudry’s original Facebook post had been updated: “We received a confirmation that the correspondence program pulled the 170-paged pdf curriculum off their students' portal and will develop a new course this summer. And guess what? You friends made sure of that. You raged, wrote and called them on it.”

Both mother and daughter are also quick to emphasize when discussing the painful events of recent weeks that they’re choosing to focus on keeping the attention on how to support the Truth and Reconciliation Commision.

“I know that there's still a lot of work left to do to address the TRC. But I have faith right now that we will continue to move forward,” joudry said, adding that she was moved to see how quickly people mobilized to call the minister of education on her and her daughter’s behalf. “When other people around me are disgusted and outraged, I feel like we can fix this because we believe that this is wrong, and I'm not the only one who believes this is wrong.”

Related Reconciliation means looking into Shubenacadie residential school, too: Nova Scotia has yet to find any graves at the site, but that doesn’t mean they aren’t there.

Reconciliation means looking into Shubenacadie residential school, too
Nova Scotia has yet to find any graves at the site, but that doesn’t mean they aren’t there.
By Victoria Walton
News
Above all, the pair want the rest of Nova Scotia, and Canada for that matter, to not lose sight of what should be the main priority in this country’s moment of reckoning: upholding the TCR. “I hope it doesn't become old news to people in Canada that they don't lose momentum,” joudry said.

And while both are still reeling from the uncovering of yet another facet of their local government’s oversight that is prejudiced against the Mi’kmaq, they want to reclaim that theirs is not a story of “what is lost.”

“Our story is one of great power and beautiful teachings and beautiful people, and I'm so honoured to call them my family and my community,” said joudry. “And so I don't want any story to just be, ‘oh poor us,’ because we have such such a beautiful, rich culture and people, and that's the reason that I'm alive.”