Rail to trail project gets OK

Halifax council spends $2.7 million to purchase Chester Spur Line, a rail corridor from Fairview out to the Lakeside Industrial Park.

Halifax council last week agreed to spend $2.7 million to purchase the Chester Spur Line, a rail corridor that winds its way from Fairview, around the Fairmount neighbourhood and out to the Lakeside Industrial Park. 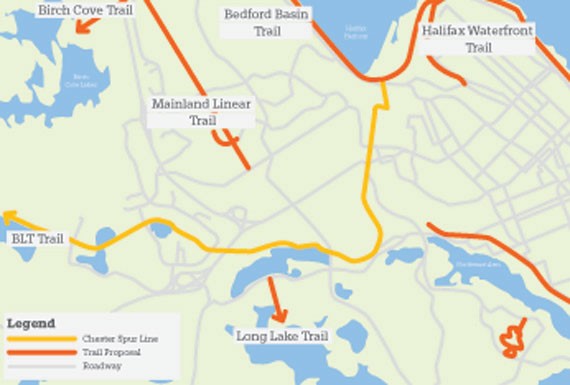 CN stopped running trains on the line some years ago, and last year put it up for sale with a $3 million asking price. The city asked for, and received, rights of first refusal, and began negotiations for the lower price. Funding comes from dedicated trail acquisition funds and from $750,000 over-dedicated to the Lacewood/BiHi interchange rebuilding. The city plans to ask the provincial Department of Health Promotion and Protection to also pony up $750,000 for the purchase.

As soon as the city acquires title to the line---by next summer at the latest---crews will build a crusher dust trail along the line, says Peter Bigelow, HRM's manager of real property. By the following summer, an asphalt multi-use trail will be constructed.

The asphalt will allow for wintertime plowing, says Bigelow. But day-to-day management of the trail will be placed in the hands of a community trail group.

The western end of the new trail will meet up with the existing Beeechville-Lakeside-Timberlea trail, an extension of the same rail line. The trail group that manages the BLT allows the use of ATVs, but Bigelow says all vehicles will be banned from the Chester Spur trail.

Chester Spur is the lynchpin to a complex city-wide trail system envisioned by trail advocates. At its Fairview terminus, it will hook up with two future trails---one leading north along the Bedford Basin, another swinging to the east, around Seaview Park and along the Halifax waterfront. The trail also will meet an extension of the existing Mainland Linear Trail through Clayton Park, and a proposed trail through Long Lake Park. And the western terminus meets the BLT.