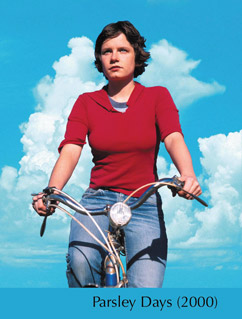 On Saturday afternoon at 3pm, as part of the Halifax Independent Film Festival, is the launch of Rain/Drizzle/Fog: Film and Television from Atlantic Canada, edited by Darrell Varga, the Canada Research Chair in Contemporary Film and Media, at NSCAD. It’s the first of two publications by Varga on the subject, and the first publication to take a scholarly approach to Atlantic Canadian film and TV, as contributors from across the country provide an indepth examination of topics such as contemporary popular television (Trailer Park Boys) and the work of filmmakers such as Andrea Dorfman and Thom Fitzgerald.

“The idea of Atlantic Region is an invented concept,” explains Varga, “to describe four different provinces and to replace the term Maritimes which has, historically, not included Newfoundland. This book acknowledges difference and diversity as part of the region, and indeed characteristic of Canada.”

In Nova Scotia, Varga acknowledges a tension between art and industry, driven, in part, by “Telefilm and Film NS’s industry-oriented mandate (where culture is secondary). The problem, and I am addressing this more in the second book, is a tendency to follow genre conventions (and the false promise of box office which is impossible to achieve in this country due to the small population base), rather than support work that is more integral to the culture of the place.” Newfoundland filmmaking, on the other hand, and “work from NIFCO (Newfoundland Independent Filmmakers Cooperative), remains very inspiring, very true to its own voice.”

NSCAD prof Bruce Barber writes about Fitzgerald’s first feature film, Movie of the Week, made while he was a NSCAD student. Jen Vanderburgh, a recent hire to Saint Mary’s University as a film studies professor, has an essay on the cancellation of The Don Messer Show and the cross-Canada response: “quite revealing as backlash to then changes going on in Canadian society and culture, notably urbanization and the rise of youth culture.” Varga’s own essay deals with “the image of the artist in several important films: Bill MacGillivray’s Life Classes, Robert Frank’s Candy Mountain, the more recent New Waterford Girl and a short film called Congratulations by Newfoundland filmmaker Mike Jones. This essay tracks the shift in filmmaking from art cinema to industry.”

In conjunction with the launch, there will also be a free screening of films by Atlantic filmmakers, including Dorfman, Sylvia Hamilton and Justin Simms, at the NSCAD Film School Academy Building, 1649 Brunswick. “The films I am screening represent the true spirit of independent filmmaking at the co-ops,” says Varga. “These are films from AFCOOP and NIFCO and they are true to the short film and art form, rather than as industry calling card. They are films that are funny, moving and compelling. I am hoping that they help inspire more of the same.”