Rally Sunday in Halifax in support of Indigenous fisherfolks

Organizers say they want Treaty rights and the Marshall decision to be upheld. 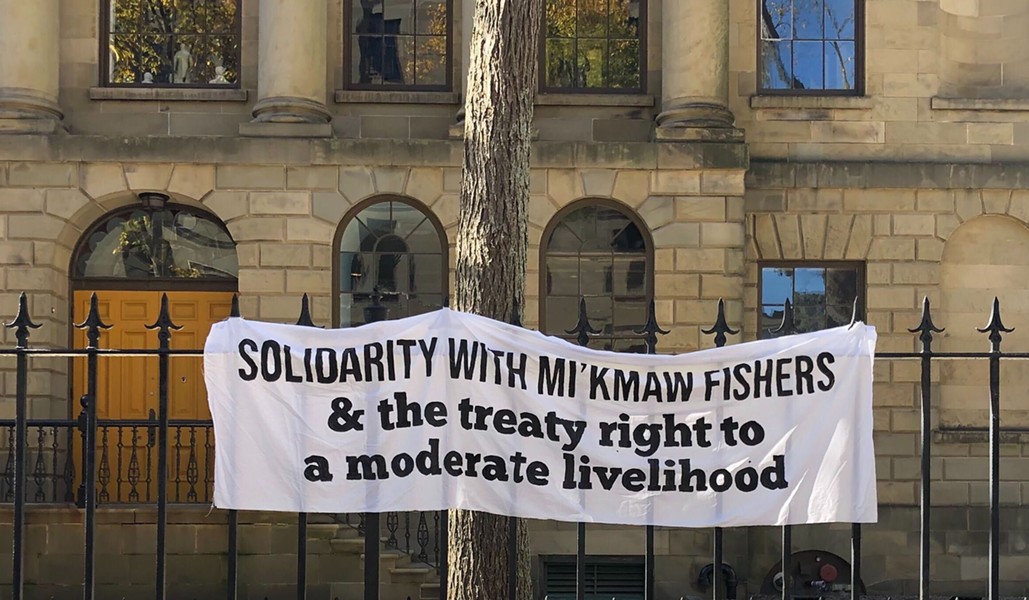 Abolish the Police Halifax and advocate Kate Macdonald are organizing a protest in solidarity with Mi’kmaq lobster fishers on Sunday, October 18 from 2 to 4 pm at Grand Parade, outside city hall.

This comes after a mob of 200 non-Indigenous lobster fishers trapped two Mi’kmaw fishermen inside a lobster pound in southwestern Nova Scotia Tuesday evening, and set fire to the van of Jason Marr, a Mi’kmaw lobster fisherman.

According to those on scene and video evidence, the mob was getting violent. “They’re throwing rocks through the windows and kicking the doors,” Marr told Ku’kuk’wes News. In the end, the Indigenous fishers were forced to leave without their lobsters.

Organizers of Sunday’s rally are demanding the Department of Fisheries and Oceans uphold the 1752 peace and friendship treaty and the Marshal decision, “to support the Mi’kmaq right to a moderate livelihood,” the Facebook event states.

In a message to The Coast, MacDonald says she felt obligated to speak out about the deep violations of the 1752 treaty taking place. “I’m ancestrally an arrivant. And love living here and being from K'jipuktuk. And it’s my duty and honour to stand by my Indigenous, Mi'kmaq community,” she says.

Sunday's rally isn't the only solidarity event being held. Early Friday afternoon, an Indigenous-harvested-lobster sale organized by Cheryl Maloney outside Province House in Halifax sold out in 35 minutes.

Also happening is an #AllEyesOnMikmaki solidarity rally hosted by BIPOC South Shore. Attendees will be meeting in Bridgewater at Minister of Fisheries & Oceans Bernadette Jordan's office on Friday at 3 pm to demand immediate actions to condemn the violence against Mi'kmaw fishers and defend treaty rights.

Attendees of all events are being asked to wear a mask and follow COVID-19 protocols.