Premier Iain Rankin says that help is coming, but businesses are already a week into the shut-down. COMMUNICATIONS NOVA SCOTIA

The suffering service, retail and restaurant industries need more than a band-aid fix, and they need it now.

It’s been over a week since Nova Scotian businesses were forced into a third-wave lockdown. For some non-essential retail stores, it’s their first time fully closed. But for businesses like salons, spas and restaurants, a COVID-19 shutdown is old hat.

“This is the second time we’ve been mandated to close, the first time was at the beginning of the pandemic last March,” says Kat Cochrane, owner of One Block Barber Shop on Almon Street in Halifax.

When the closure was announced by premier Iain Rankin on April 22, Cochrane was taken by surprise.

Related Shaming, blaming and vigilante justice is not going to get us out of this third wave: Viruses love when communities aren't working together.

Shaming, blaming and vigilante justice is not going to get us out of this third wave
Viruses love when communities aren't working together.
By Caora McKenna
COVID-19

During the first lockdown, in 2020, Cochrane’s successful business quickly went in the hole, even with help from the provincial government's Small Business Impact Grant. “I lost well over $100,000 in business revenue,” she says. “And judging by current trends I’m looking to lose between $30,000 to $35,000 for this month of closure.”

When the sector re-opened last year, employees had to cut down on hours, and the shop has space for two fewer chairs due to social distancing.

“My employees are working at diminished capacity. I’ve come up with a schedule so everyone is guaranteed a minimum 30 hours, but when staff are used to working 35 to 40 hours—sometimes 50 hours a week being fully booked—that’s a huge loss in their income,” says Cochrane. 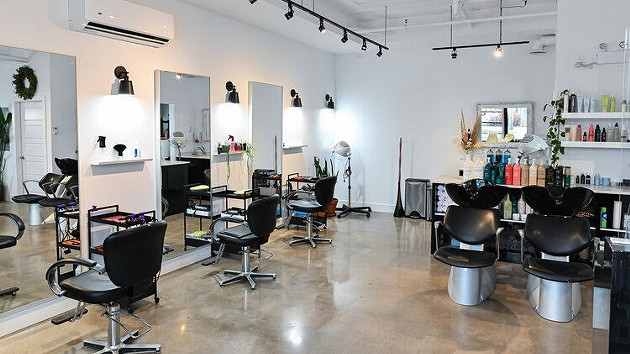 Now, the shop is closed again, for “at least” two weeks. Cochrane says each day is pushing her business deeper into financial trouble and she expected the government to provide something like the original Small Business Impact Grant by now.

“I personally am incredibly disheartened and disappointed in mister Rankin’s lack of response to small business. Especially for businesses that aren’t able to bring in any sort of revenue, like mine, for example,” she explains.

But despite the closure forced by the government, those in power have announced no new financial assistance for closures brought by COVID's third wave.

“I know that there is eagerness to get that grant out to businesses. I understand that rent is due for many of them tomorrow,” said Rankin on Friday. “All I can say is we’re pushing very hard to ensure that that program gets expedited.”

But when that help is announced, Cochrane says it won’t be enough. During the first closure, she says the SBIG awarded to One Block was less than $5,000.

The other programs provided by the federal government like the salary subsidy (CEWS) and the rent subsidy (CERS) are also not accessible to everyone.

Related 15 lockdown life enhancers to help you hold on: Our best advice for coping as COVID-19’s third wave washes over Nova Scotia.

15 lockdown life enhancers to help you hold on
Our best advice for coping as COVID-19’s third wave washes over Nova Scotia.
By Morgan Mullin
Arts + Culture

“That is pretty much the only help that I’ve received, people are like ‘oh there’s all these federal programs, there’s this, there’s that,’ but I have not qualified for a single one of them,” says Cochrane.

A letter sent and signed by a group of Halifax businesses—headed by Lara Cusson of Cafe Lara on Agricola Street—calls on the provincial government for more aid.

“How can the Province expect Small Business owners to wait while the people working on this important program ‘figure out the details’? As Small Business owners we are now dealing with zero security, no wages, and mounting bills while government employees, who have guaranteed jobs and salaries, play with our futures,” reads the letter.

Last Friday, the premier said a new program would be announced at the next update.

“I hope to have news on that on Monday, I’ve been pushing very hard making calls myself to the third-party groups that are involved in administering some of the grants,” said the premier Friday.

But on Monday, there was still no news.

“I didn’t commit to today, I said I was pushing as hard as I can to get it out this week,” he said Monday, “And so that’s still the plan, and my minister of inclusive economic growth will be launching the program’s details tomorrow.”

Whenever it gets announced, it’s still not clear that the announcement of a program actually means the implementation of that program.

In early March, Rankin announced the Small Business Real Property Tax Rebate Program, which totals $7 million to be allocated to restaurants and bars, service businesses like spas and hair salons, and fitness establishments.

“This is cash in the pockets for restaurants and other small businesses in the service sector,” said Rankin on March 2 when he announced the plan during his second-ever COVID presser. But two months later, applications for that program are nowhere to be seen.

“We are currently in the process of preparing the online application. This work is necessary to ensure the safety and confidentiality of applicant information and to help ensure payments are issued in a timely manner once applications are received,” reads an April 28 email from the program’s administrator sent to The Coast.

“I just don’t think whatever they put out is going to be enough. I think if he hasn’t come up with anything at this point, I’m not optimistic in what he has to offer us.” tweet this

The funding details also leave a lot to be desired. Each qualifying business can apply for either a $1,000 lump sum, or a rebate of 50 percent of its commercial property taxes paid from July to December of 2020. The government says there are 3,300 eligible businesses.

How far does $1,000 go? For a business paying an employee the living wage of $15 an hour, it’s about a week and a half’s full-time work (67 hours). For a business looking to invest in barriers for their space, it’ll buy about 10 Plexiglas sheets.

What it will get you is a lot of hand sanitizer. But right now, most businesses are looking to pay off COVID debts from the past year, not restock on disposable masks and sanitizer.

“I’m not going to go down without a fight at this point. I am fortunate that my landlord is willing to work with us so that is a blessing,” says Cochrane. “But at this point, I have personally been living off my credit cards since last year.”

If or when the money does come through for businesses, Cochrane hopes it’s more than before.

“If they’re just going to give us 15 percent of our best month from last year or whatever, I think it’s laughable, I don’t think it’s enough. Especially when you are forcing people to shut down their livelihoods,” she says. “I just don’t think whatever they put out is going to be enough. I think if he hasn’t come up with anything at this point, I’m not optimistic in what he has to offer us.”

While Rankin says more help is coming, business owners are losing out hope and losing money in the meantime.

“I think the fact that we were closed a week ago and we still don’t have an answer from him, it’s unacceptable, and I just don’t understand how there’s been nothing,” Cochrane says. “It’s not a response, it’s just lip service.”