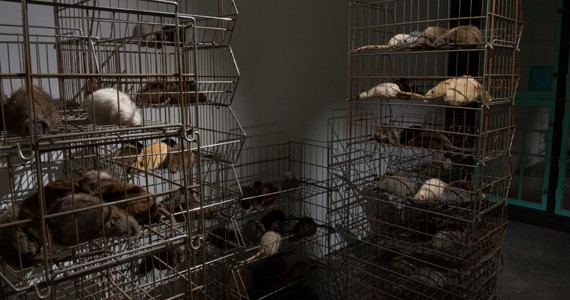 Janice Wright Cheney's Cellar is not for the squeamish. Exiting the elevator on the fourth floor of the AGNS, the viewer is confronted with two extremely realistic looking Norway rats conferring with each other in the corner. You can almost hear the squeaks. Further inside the exhibit is a world of vermin, in cages and out, sneaking, scurrying, generally creeping the daylights out of you. Dimly lit, the shadows from the cages—bin-like stacks that evoke a multitude of images, rats in a post-apocalyptic abandoned laboratory, pet rats hoarded and forgotten, an old subway platform where the convenience store racks have been re-populated with those most durable of creatures—cast long, obscuring swaths in which Wright Cheney's handmade furry rats scuttle. Windows and a door at the back of the room—trimmed in Wright Cheney's dupe of Paris Green, the arsenic-laced paint that was once used as an rodenticide in Parisian subways—references Manet's "The Balcony," with tension and toxicity.

The project, which was five years (and hundreds of rats) in the making, began with Wright Cheney's fascination with insects, mainly what we choose to display in an insectarium and what we eliminate. Invasion and transgression are two themes that recurred, and Wright Cheney's focus eventually shifted to rats. "These are the creatures we go to a lot of trouble, spend a lot of money and use a lot of harsh chemicals to keep them from places we live," she says. "Yet they're really enjoyed and admired as pets, we use them in laboratory research, they help us understand the world. We're really quite embedded with rats."

"Many things occurred to me as I was making these but one in particular was that I was kind of doing this in reverse, I was taking a fur coat and skinning it, taking out the lining, stripping away everything but the pelt and re-fashioning an animal body, it's an interesting kind of reverse process."

Cellar addresses issues of consumption. The rats clothed in luxurious, coveted furs, serve as a reminder of our own gluttony. "One of the things that I've come to realize—and I don't want to make any big claims to this—but the thing that is so fascinating with rats is that their presence signifies our excess," Wright Cheney says. "They thrive where we thrive, they followed humans as humans begin to live in cities and have waste. The rats are as opportunistic as we are, and it worked out for them. They displace indigenous species, they do all the things that we do."

"Anthropologist Mary Douglas said 'dirt is matter out of place,'" says Wright Cheney. "I used that to talk about vermin, I've used the phrase 'vermin nature is out of place.'" Out of place everywhere but in Cellar.