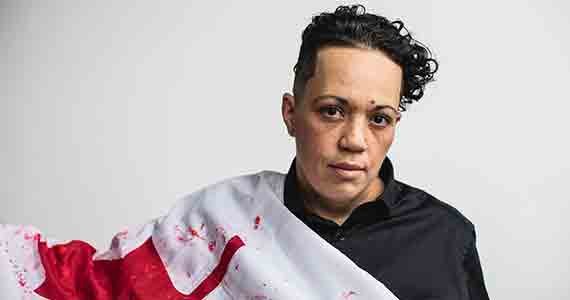 From the tartan to the Canadian flag, Raven Davis's latest project is taking time-honoured Canadian symbols and challenging their place. Through gallery pieces and public performances, the 2-Spirit Indigenous multidisciplinary artist is creating a critique of Canada's 150 festivities, The De-Celebration of Canada.

By highlighting everyday reminders of colonization–such as the noon cannon at the Citadel, "a very loud and very clear reminder of British presence in Halifax, on unceded Mi'kmaq territory"–Davis hopes to explore how symbols of conquer and power contribute to "the erasure of Indigenous people in Canada."

The De-Celebration of Canada will bring art-based activism to landmarks across the city this summer. Davis's pop-up performances include placing a prayer bench from a church on Citadel Hill, performing a duration piece–one hour and 50 minutes in length, to mark 150 years–and positioning themselves near the contentious Edward Cornwallis statue. Last winter, they danced atop a paint-splattered Canadian flag while performing at the Khyber Centre for the Arts.

"Some people may find it offensive," says Davis, an Anishinaabe artist born in Toronto who spent a decade in Cape Breton and now lives in Halifax. "I'm inviting people to consider the lack of protection that the government places on Indigenous people," Davis says, contrasting it with protocols and guidelines to protect and honour the Canadian flag. Davis says festivities celebrating the country's sesquicentennial—promising to be awash in the maple leaf—"perpetuate the myth of confederation."

"This year is going to be very difficult with Canadian flags and parades and speeches and lip service by our officials." Davis says instead of putting government money "into a huge birthday party," funding could be better used on reconciliation, healthcare or suicide intervention in Indigenous communities.

Indigenous sovereignty has always been a theme in their work, but Davis says through "using Canadian symbolism, people are more alerted to it. It's such a strong visual they can relate to." This year, the artist says they're strengthening themselves to hold some tough conversations about the narrative of the nation's history. The parent of three says, "I want my kids to see me being political and bringing awareness to Indigenous history and struggle."