Re-casting a municipal budget in a pandemic is a clusterfuck

Here's how Halifax's councillors are handling it. 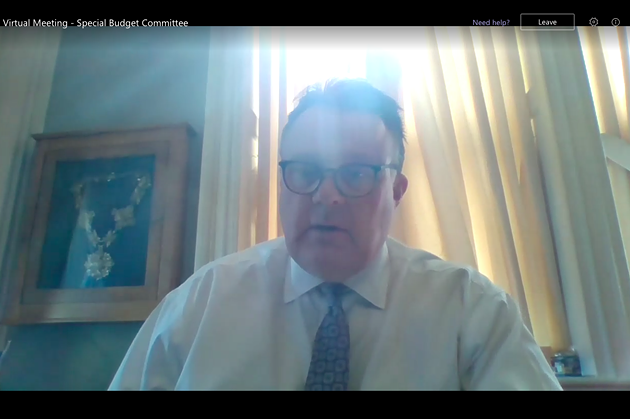 Halifax Regional Municipality’s budget process is dense and confusing in a good year, where there are just normal spats about rural transit versus downtown development versus community programming versus big honking armoured vehicles versus new books for the library or a football stadium.

Halifax Regional Council made it through all that—and then came COVID-19. It wasn’t quite back to the drawing board but something worse: just plain old cuts, $85 million worth, across the board.

When council had its first virtual meeting, CAO Jacques Dubé and CFO Jane Fraser warned councillors of the cuts that lay ahead. They consulted with business departments and came back this week with draft one of the plan.

Based on their conservative calculations, HRM was going to be $85 million short for the 2020/21 budget. You could hear seniors’ snow shovels snap under the weight of the impending decisions.

A combination of tax revenue loss (COVID-19 means many fewer residents and businesses are going to pay their taxes come June 1—a deadline that was already pushed back because of the pandemic), program revenue loss and transit revenue loss (a big $20 million) all contributed to the $85 million cut price tag. It’s a conservative estimate, says Fraser, but it’s also cautious—look forward to the 2021/22 budget being even tougher, says Dubé.

So this week, HRM’s elected officials sat down around the table (~virtually~) and started to make value judgements (again) based on the proposed cuts. But, before they got down to what stays and what goes, they’ve asked staff to see if they can come up with a bit more money. They wanted to know if they can push the risk factor a bit higher in the name of happy residents (voters), and spend some of that “rainy day reserve money,” while it most certainly pours outside. ("We haven’t had rain like this in my lifetime,” said mayor Mike Savage.)

Councillor Mason reminded that “staff are the advisors but councillors are the deciders” before putting forward a motion to get staff to return to council with more details on things up against the chopping block and ways to pay for them–which will kick off a “parking lot” process, allowing councillors to really get their value-judgement on. (The details of his motion call for an alternative budget that shaves $33 million from the original $85 million request, keeping staffing levels, programming and grant money that'll keep arts and volunteer organizations afloat.)

Mason’s motion passed, but there are still things on the cutting block that aren’t included in his proposition. So department leads are on hand to answer questions for councillors about the proposed cuts. Questions like “what if we don’t cut the senior snow removal program to save $600,000?” and “what do we do about the stink if we cancel the weekly green-bin pickup?” (Due to a contract time crunch, the green bin weekly program cut was actually approved today—summer pickups will remain on a bi-weekly basis. A motion to move the snow removal program to the “parking lot” passed too.)

It’s a slog, the process. Just this week HRM’s Social Policy Lens—the result of a notice of motion brought forward by councillor Lindell Smith in 2017—was passed at Tuesday’s regional council meeting. It gives direction to staff to consider social policy when crafting staff reports and bylaws and budgets. As Smith said, it stands up against the notion that things (like supports for substance-use, the effects of racial discrimination, food insecurity—all of it) are outside of the scope of the municipality. “Everything we do in the city has an impact on people’s lives and I think we need to recognize that,” said Smith.

But the policy wasn’t set in stone before this budget process kicked off—leaving councillors to fuss over which things the municipality spends money on are essential, and which we can do without for now.

It’s democracy in motion. You rarely think about how you take the long way home because the shortest route is really dark at night and you feel unsafe; that new bus terminal that’s taking forever to get built and how the road you take to work is riddled with potholes; about the fact that you have to wait months to get that book you’ve had on hold at the library—or the arts festival you pray-to-god isn’t COVID-cancelled—all at the same time. But at budget deliberations, they’re stacked up against each other, jaws clenched, merit oozing.

Some things get to stay and some get to go, and the person you voted for (or who was elected in your vote’s absence) makes that decision.

It’s a walking, talking (er, waiting for the audio to kick in and then talking) reminder why having a diverse council is so important. People who think the same will vote the same (or as the-same as the differing population density of their district will let them). (Let that serve as a reminder to shoot your shot.)

The world since COVID-19 is wild and if you ask Dubé, this is just the beginning and things will get worse (and harder). The committee of the whole (what they call regional council when it's doing budget talks) will meet again on Friday, and likely again next week and for a few more weeks, before the details of the budget are hammered out and the tears have dried.

By June 1, HRM will know who has and hasn’t paid their taxes, allowing for a more accurate number for how little cash flow the municipality will have on its hands. It’s likely there won’t be a budget vote until then.

There’s also a possibility that big chunks of change will come through from the province or the federal government, allowing for a loosening of the belt if the dollars line up with the projects. But those charged with the fiscal saliency of a municipality aren’t racing to bank on possibilities.

You can browse the heinously large spreadsheet of cuts here. The capital spending cuts (AKA new projects and infrastructure-y things) start at page 29. The column of current interest is "budget reductions" and if it’s in brackets, it’s not being cut, it’s being added.

Then starting on page 33 you get the cuts by business unit. The opposite is true here for the brackets: if it’s in parentheses, it’s a proposed cut.

You can find your councillor’s contact info here. Have fun.