Read an excerpt from Just Jen

Grab a copy of the powerful memoir at the launch party this Wednesday at the Halifax Central Library. 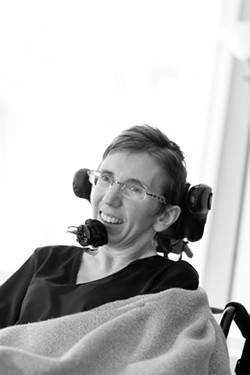 Jen Powley was diagnosed with multiple sclerosis at fifteen. By thirty-five, she had lost the use of her arms and legs.

With Just Jen, Powley produces a powerful memoir of what happens after diagnosis, and how a person's life can change. Powley doesn't shy away from difficult questions others are afraid to ask, and tells her story in an inspiring and uplifting way.

My friend’s three-year-old brother shook off attempts to help him with his coat.

“I do that,” he’d say. He had just mastered buttons. Though his dexterity was still developing, his commitment to do it himself was admirable.

Months after they leave the womb, children discover their hands, curl and uncurl their fingers. A year after that, between thirteen and eighteen months, they figure out how to use utensils.
I was unlearning the skills I had once mastered.

Zippers became a problem. I could zip the fly of my jeans, but small zippers, like those on wallets, were impossible.

Velcro closures on shoes reminded me of elementary school. I was not willing to shed all appearances of maturity for convenience. I resorted to elastic laces I kept tied. Under close inspection you could see the difference, but people on the street wouldn’t notice.
I gave up shirts with buttons the year I moved to Halifax. The impossibility of manipulating tiny buttons into their holes was frustrating.

I had read Mine for Keeps, Canadian author Jean Little’s novel about a girl with cerebral palsy, when I was ten. Sally, the heroine, left a segregated school for students with disabilities to return to her family’s home. Sally’s mother bought clothes that would be easy for her to deal with. I admired Sally’s courage and how accepting her family was of her differences. Her special needs weren’t problems — they were merely challenges. My mother picked out clothes for me with the same care as Sally’s mother.
I visited my sister’s home in Edmonton when her firstborn, Maddie, was one year old. I parked my wheelchair at the kitchen table, careful to avoid wheeling over the tiny fingers of my crawling niece. I settled into a conversation with Mom, Nicole and Danny, my sister’s husband. Maddie wasn’t walking yet but she had learned to stand. After some catching up, I noticed Maddie clutching the spokes of my wheelchair tire. As I watched, she pulled herself to a stand.

My wheelchair didn’t scare her — she saw it as an extension of me.

She didn’t feel sorry for me.