Reading between the pipelines

Why are Americans so much better educated about the risks of the Keystone XL project than Canadians are about Line 9, a similar Enbridge project that will pipe bitumen through Toronto? 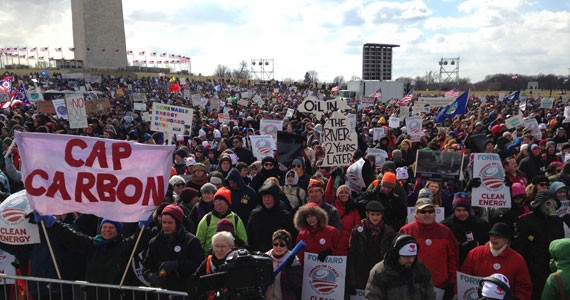 South of the border, American environmentalists are perhaps better organized than ever before, at least around climate change policies. Their most pressing target is the proposed Keystone Pipeline, built by energy giant Enbridge, which would carry diluted bitumen from the Canadian tar sands to refineries in Texas. The bulk of the project consists of reversing an existing oil pipeline that connects those refineries to the state of Illinois.

The protests against Keystone are large and boisterous. There have been regular demonstrations outside the White House, with high-profile environmentalists like Bill McKibbon and NASA scientist James Hansen getting arrested. Keystone is on the US daily news programs most every night. The public seems evenly divided on the proposal, but nearly everyone at least knows about it.

A similar Enbridge project here in Canada, however, is hardly making a blip on public consciousness.

Called Line 9, this pipeline would reverse an existing oil pipeline that connects Montreal to Sarnia, rebuilding it to carry diluted bitumen in the opposite direction.

"It's a very dangerous pipeline," says Adam Scott, climate and energy director at Environmental Defence, a Toronto-based national organization that is following the proposal closely. "They want to use the pipeline to ship western tar sands oil through Ontario to Montreal, where it connects to another pipeline that runs down to the States, or to tankers. The longer-term plan is to use Line 9 to export tar sands oil.

"The risks are identical to the Keystone project," continues Scott. "They could ship 300,000 barrels per day of diluted bitumen right through Ontario and Quebec. It runs very close to Lake Ontario, through populated areas, by farms, next to schools. Right through the city of Toronto. And Enbridge doesn't have a good track record on pipeline safety."

Enbridge and the federal government have been keeping Line 9 below the radar screen, and changes in National Energy Board policy implemented by last year's C-38, the omnibus budget bill, mean it's nearly impossible to comment on the Line 9 proposal, even if you know about it. Wannabe commenters must fill out a 10-page application, and attach a resume and references, to be granted the privilege to be considered to be allowed to comment. And the deadline for filing the application is just two weeks away.

"It's very clear that those changes were designed to limit public participation," says Scott.

So why the difference between public awareness of Enbridge pipeline proposals in the US and Canada?

"The International Energy Agency said last year that we basically have five years to stop investing in fossil fuel infrastructure, or we'll hit some tipping points in term of climate change," says Scott. That has generated a "very significant climate movement in the US," specifically targeting pipeline proposals.