It’s mid-morning on a Monday when Brandon Levesque and Lauren Marshall, co-founders of Real Fake Meats, Halifax’s first plant-based butcher, answer the phone for this interview, sitting down to a cup of coffee with almond milk creamer. The duo—friends for about a year—are both food-obsessed vegans: Marshall having helmed the kitchen at EnVie for two years before launching private plant-based cooking classes, and Levesque, as he puts it with a laugh, “having started cooking a couple years ago in sort of an animal mechanism to attract a mate.”

“To win me over, Brandon made me a buffalo cauliflower sandwich. We aren’t dating, obviously, but that’s where I was like ‘OK, we can do this,’” Marshall adds, laughing. Their friendship blossomed around a shared love of recipe development—recreating typical meals to suit their meat-and-dairy-free palates.

“We made fake fish and chips and we just couldn’t stop eating it. I think we each had three pieces,” Marshall says, recounting the night it came clear to the pair that they should start a business. From there, “every day Brandon was like, ‘Why aren’t we doing this? Why aren’t we selling this?’ and finally one day I was like ‘OK’,” Marshall starts—“She just sorta snapped,” Levesque interjects—“I just gave in and was like ‘OK, shut up, we’ll do it’ and got the Facebook set up and then he’s like ‘Wait, we’re really doing this?’” Marshall says. And that’s how they hatched the concept for Real Fake Meats, vegan butcher’s boxes of dairy-free cheeses and meatless products.

The boxes, a pick-up subscription service offering a curated section of items made by Marshall and Levesque (think everything from coconut “bacon” to a cauliflower, lentil and walnut “beef”), launch May 12. “Starting out with butcher boxes, we get to touch all the food. We get to make sure it’s exactly how we want to make it. We’re not having to rely on anyone else to do it, and I love the idea of having a business where we get to have full control of everything,” Marshall adds. 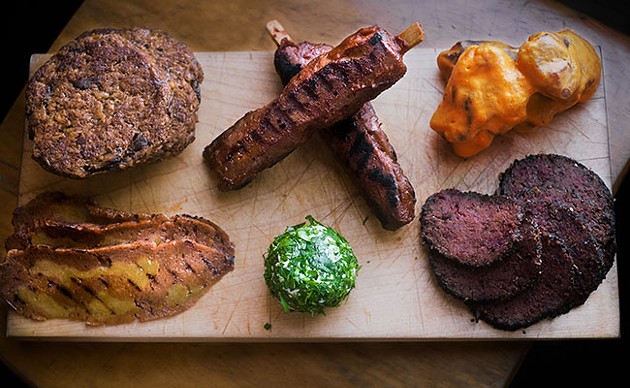 So far, the feedback on social media has blown them away. “People keep asking when it launches, where they can buy it,” Marshall says of the double-tap-worthy snaps of “real fake poutine” complete with cauliflower and “fake-.”

The time it takes to perfect a recipe varies, but common ingredients between foods (smoked paprika and nutritional yeast are frequent stars) make the Real Fake Meats kitchen a place of constant adaptation and experimentation, the pair says. “We’re going to have gluten-free options and soy free because that’s something I’ve always been passionate about: Being able to offer something for everybody. I always hated the old-school restaurant mentality of ‘no substitutions.’ We’ll start small with people [with sensitivities], but eventually you’ll be able to go on the site, throw what you want in your cart and it’ll be ready for pick-up,” Marshall explains.

“We love flavours so much and I find a lot of vegan alternatives in grocery stores are just very bland. We wanted to make something fresh,” Levesque says. Marshall quickly agrees: “There’s a lot of levels to the name of our business, Real Fake Meats, and I sort of resonate with it—it’s fake, but it’s also real food. When you go to look at the ingredients that we’re using, you’re not gonna see anything that you can’t pronounce, or see 50 ingredients in it.”