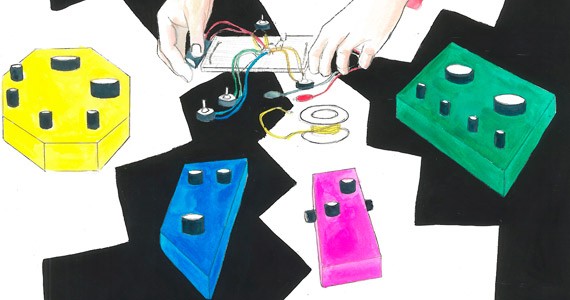 When Halifax intermedia artist Rebecca Baxter began designing and building sound machines, she had no idea that within a year, she'd be scoring Eraserhead with The Flaming Lips for a private David Lynch party. She also didn't realize that bands and artists like Holy Fuck, Miley Cyrus, Buck 65, Mike O'Neill, Panos or Moby would play and record with her machines.

But Baxter did know that she wanted to engineer integrated-circuit sound devices that mixed her background in design with her interests in electric technologies. Since last January, after a month-long artist residency in Berlin, Baxter began creating custom multi-voice oscillators.

"A really simple circuit is a good starting point to learn from," says Baxter, who looked to open-source materials online to figure out how sound technologies interact. "I learn best just by jumping in and doing it. I realized the machines I was making are unique instruments that require a lot of listening to hear tempos and pitches, and to experiment with filters or create samples."

Baxter started selling her machines online after recreating simple circuits and designing custom models by order. Even though the schematics are basic, Baxter's machines have infinite sound possibilities, and have bright retro colour schemes and futuristic aesthetics.

She began sharing her machines on Instagram and caught the attention of Daniel Huffman of New Fumes, an electronic act from Texas, who showed them to his musician friends.

"All of a sudden I'm getting text messages from Wayne Coyne, saying, 'I love your sound boxes. How do I get 10 of them?'" Baxter recalls. "It's all kind of a strange dream."

As production and popularity picked up, Baxter noticed people would ask or mention whether her machines had inputs so that sounds could be manipulated through other devices. Last month, she launched an Indiegogo campaign to fund her design, the Omega Sound Machine. In a few weeks, Baxter has surpassed her fundraising goal, making the Omega an upcoming reality.

"I'm not inventing anything, but I'm taking what's out there and reconfiguring the circuits. I'll design the Omega to sell. I'm also going to create kits with the schematic and all the parts—the circuit board, resistors, diodes, transistors, capacitors—so people can solder it and make their own," she says. "It's a creative project for me, so it's fun to share what I'm learning and how I'm doing it."

Baxter says her machines are also fun to use: "It's hands-on, you can turn knobs to create music instead of using software like Ableton Live. It's a throwback. It sounds like '80s arcade games and that's part of the charm for me. It's quirky. You can generate such weird sounds," she says. She's been learning even more about her machines by playing them in her noise band, Meteoroid.

Baxter hopes the Omega Sound Machine campaign will generate enough interest to someday commercialize the product, with the right demand. Currently, she creates each machine by hand over a few days. Her sound adventure has launched her into a new galaxy: "I've had such great success. I just know I'm on the right path. I'm going to keep learning and following my heart."