When everything goes wrong, something goes right. 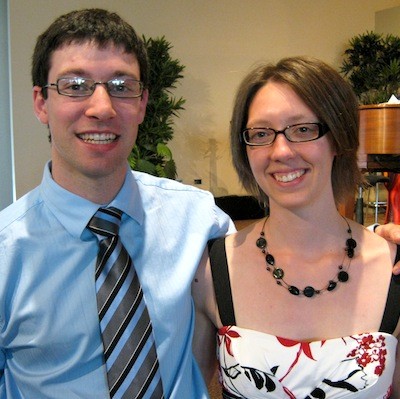 TJ and I met at a retreat that took place at a convent in Pictou in January of 2009. A couple of weeks later we went out for lunch - not as a date, but it quickly turned into a date! After two years of dating we both felt it was about time to get married. Finally, in June of 2011, TJ was away for work and promised he would plan something special for the first weekend he was back. We drove up to Cape Breton Highlands National Park to hike in to Fishing Cove, a backcountry camping site. Unfortunately, almost everything seemed to go wrong! The path we took had been partially lost to a landslide, so we were hiking over mounds of dirt and fallen trees. The weather was getting windier as we hiked in and by the time we reached the campsite it looked like it was going to storm. That’s when we discovered the tent we had borrowed from a friend was missing a vital piece – the fly! We ended up rigging the tent as a tarp, using a rope to keep it (barely) off the ground and large rocks to hold the edges down. By this point we were hungry, but it quickly became apparent that on the way in (maybe climbing over one of those trees!) we had lost the large loaf of bread that was supposed to make up most of our dinner. After a bite of cold cabbage, tired and disheartened, TJ led me to a spot overlooking the ocean, got down on one knee and asked me to be his wife. Although the wind kept me up most of the night, I couldn’t help but smile every time I glanced at the diamond ring on my finger!

*As told by Lauren Wiebe