Nova Scotia has yet to find any graves at the site, but that doesn’t mean they aren’t there.

From 1930 to 1967, Shubenacadie Residential School was the only one of its kind to exist in Atlantic Canada. Over the course of 37 years, more than 1,000 children are estimated to have been taken to the school—10 percent of the Mi’kmaw children in the province.

While it was dubbed an “educational institution” by the government and the Catholic church, children who were taken there were subjected to poor living conditions and overcrowding, corporal punishment and forced labour, and were often malnourished. On top of this, they were taught a racist curriculum meant to strip Mi’kmaw youth of their culture, and were punished for speaking their own language.

This information was widely revealed in the Truth and Reconciliation Commission’s final report, released in 2015. One example from a Shubenacadie school survivor tells of how, in 1934, the principal couldn’t determine who had stolen money and chocolates from a staff member, “so he had the suspects thrashed with a seven-thonged strap and then placed on bread-and-water diets.” 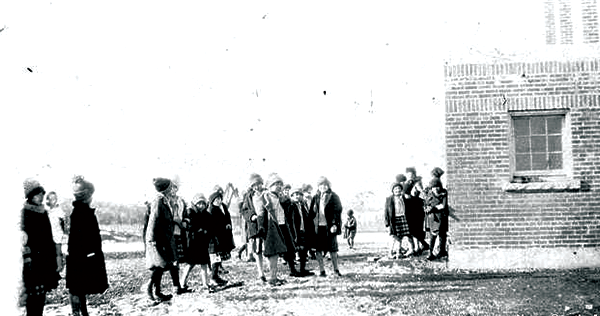 Nova Scotia Archives
Over the course of 37 years, more than 1,000 children were taken to Shubenacadie Residential School.

One of the calls to action from that report (page 266) is to create a National Residential School Student Death Register. Another call to action is for governments and land owners to “develop and implement strategies and procedures for the ongoing identification, documentation, maintenance, commemoration, and protection of residential school cemeteries or other sites at which residential school children were buried.”

But in the six years since, few of the report’s calls to action have been met, let alone publicised. Then, last week, the grounds of Kamloops Residential School in British Columbia were excavated, revealing the remains of at least 215 children who perished due to the school’s racist agenda.

Elders from the Tk'emlúps te Secwépemc First Nation said they hired a specialist in ground-penetrating radar to carry out the work, and that their language and culture department oversaw the project to ensure it was done in a culturally appropriate and respectful way. All the bodies found at Kamloops are believed to be undocumented deaths.

In reaction to the findings in Kamloops, prime minister Justin Trudeau said, “it is a painful reminder of that dark and shameful chapter of our country’s history.”

The news that remains were found at the former Kamloops residential school breaks my heart - it is a painful reminder of that dark and shameful chapter of our country’s history. I am thinking about everyone affected by this distressing news. We are here for you. https://t.co/ZUfDRyAfET

Here in Nova Scotia, it’s unknown how many bodies may lay beneath the grounds at Shubenacadie. According to the Mi’kmaq Rights Initiative, ground-penetrating radar has been used at the location under direction of Mi’kmaq Elder Doreen Bernard.

“To date no graves or remains have been found,” says the Initiative, but “we are still looking.” The group plans to search other sites as well, like nearby Snides Lake.

Across the country, dozens if not hundreds of municipalities have lowered their flags for almost nine days, or 215 hours, one hour for each child found at the Kamloops school site. Nova Scotia premier Iain Rankin said he would lower all provincial flags as well, but fell short of a commitment to fund further radar use on the Shubenacadie school grounds, or carry out other reconciliation efforts in the province.

This morning the flags @NSLeg were lowered to half mast until June 8th to honour the lives and memory of the 215 children found buried on the grounds of the former Kamloops residential school. pic.twitter.com/pRl60VbvZz

“We cannot avert our eyes from this tragedy,” he said on Twitter. “We must all take this moment to recognize and learn from the societal harm done by the residential school system across the country, including Nova Scotia, as we move along the path toward reconciliation.”