One of downtown’s longest-standing mistakes finally has a plan 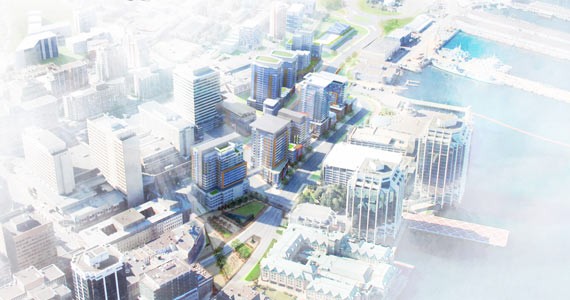 Halifax is about to press redo on a major piece of downtown infrastructure. Mounting repair costs along with a fresh city council are edging the city closer to the redevelopment of the Cogswell Interchange.

Finished in 1973 and considered progressive by urban renewal advocates, few would argue the concrete dinosaur has stood the test of time. When he was elected mayor in 2012, Mike Savage stated that the "outdated" relic's demise was a priority, and the public jumped at the chance to muse about the downtown land's future.

Released in April after public consultations, a new report produced by Ekistics Plan+Design will guide council in deciding the future of the area. The interchange's purpose as a four-wheel thoroughfare is "the direct antithesis of the vision for the Cogswell District almost 45 years later," the report states.

Bulldozed in the 1960s to make way for the interchange, the historic downtown grid should be rebuilt, the report recommends. The extension of the waterfront pedway and multi-use trail along Barrington Street would improve walkability and connectivity between the north end and downtown.

High-density residential with ground-floor retail should be a priority in the redevelopment plan, the report continues. Situated in one of the largest viewplane-free areas of the downtown, the Cogswell lands allow for higher buildings, and at their feet, a sunny, public square should be created to anchor Granville Street, the report recommends. The pedestrian and cyclist experience should also be improved along with connectivity to the waterfront.

In many ways, the report asks downtown Halifax to return to its pre-urban renewal state. Popular in other North American cities in the 1960s, urban renewal was the risky experiment of wiping out high-density neighbourhoods, mostly in downtown areas, in favour of "improved" infrastructure. (The planning theory also played a part in Africville's fate.) Coupled with the then-popular idea that car-and-truck traffic should be prioritized over congestion-causing pedestrians and cyclists, the Cogswell experiment cut off pedestrian traffic from the waterfront, and discouraged shoppers from travelling between Gottingen and Barrington Streets.

Even so, Halifax dodged a bullet by today's planning standards. Following construction of Scotia Square, the plan was to build Harbour Drive, a multi-lane highway that would plow through the downtown and circle the peninsula, entirely severing foot traffic to and from the harbour.

Longtime planning activist Alan Ruffman was part of a group that fought Harbour Drive in the 1960s and '70s. But they didn't defeat it. Instead, he recalls the city couldn't fund the project, so "it just atrophied and went away." It's one less thing Halifax has to undo. "We should never have built it," Ruffman says of the Cogswell structure on death row. "You can't even go from Barrington Street to Barrington Street without going through that damn interchange."

He hasn't read the report, but he thinks the idea of extending the downtown grid is a good thing, as is an emphasis on residential development. Higher buildings in that area, he says, likely won't be a problem. --Hilary Beaumont