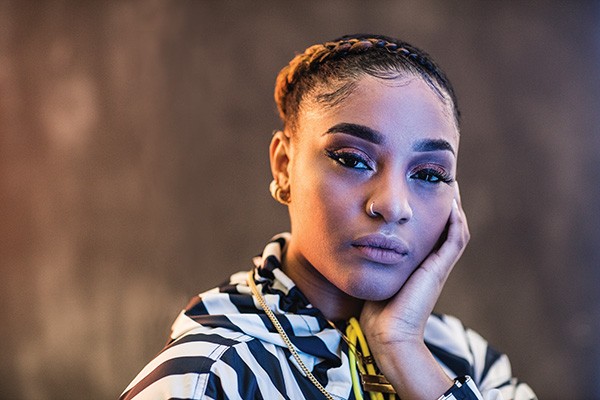 Growing up in the church, R&B-singer Reeny Smith witnessed first-hand the powerful effects of words and music.

Delivering inspiration, hope and faith through song is second nature for the 25-year-old sensation, who dropped her first EP I Am Reeny back in 2015 and has since continued to build her profile both locally and internationally. Within a few short years of stepping on the scene, the soulful singer has gone from playing small community concerts to opening up for Grammy Award winners at Halifax Jazz Festival.

But her greatest milestone yet is fast approaching: The June 14 release of her debut album, WWIII: Strength. Courage. Love.

"It hits on relationships—not really breakup stuff, but more on finding love and the uncertainty when it comes to love," says Smith. "It's that weird phase where you're trying to discover love, instead of being in a relationship or breaking up—it's trying to get to that place."

Sonically, WWII is as contemporary as it gets, while still allowing for Smith's powerhouse vocals to shine through. By incorporating pop, dance and urban elements into the mix, the collection of trendy songs will no doubt earn even more industry acclaim for the new artist. Having worked with various producers as far away as Germany, Smith is aiming for international and commercial appeal.

With influences such as Beyoncé, Alicia Keys and Whitney Houston, Smith's sound is clearly Top 40 oriented, but it's not the norm for east coast music, which is why she is so grateful for her atypical success.

"I don't call it dumb luck, but it's definitely unusual for me to be having the success that I've had on the east coast," she says. "My career is mainly based in Atlantic Canada, so you wouldn't expect my genre to be that popular here, but people see my show and they love and respect it. I guess things are changing now, so I'm happy to be a part of that movement."

However astounding Smith's local success may be, it didn't happen without the love and support from her community. Born and raised in North Preston, her natural-born talent was inspired and nurtured by her family and friends from an early age. And with both her father and grandfather as members of prominent Canadian gospel bands, as well as her uncles in the Carson Downey Band, it's safe to say music runs through her veins.

"Everyone goes through that stage where you don't know what you're made to do and contemplating life," says Smith. "My family was huge in helping me define a clear path for what I wanted to do with my life. Most musicians don't have that support and encouragement at home to help them go into music because the business is so tough and cutthroat—but that's never been my experience."

Having such strong support, as well as a top-notch music education at St. FX University to cultivate her gifts, Smith was poised for excellence. If the term "new artist" seems unfitting for a musician like her, it's understandable given the exposure and accolades she's racked up prior to releasing a full-length album. In fact, Smith has been capturing attention and praise from within the music industry since 2011, when she received the Portia White Award for Excellence in Vocal Performance. If that wasn't enough, she's gone on to win numerous awards from prestigious art organizations such as the Nova Scotia Talent Trust, and perform to sold-out crowds alongside Anderson.Paak and composer Dinuk Wijeratne.

Now in the next chapter of her career, Smith is ready to take things to the next level with WWII. Being an accomplished studio musician as well, the singer self-produced the album's lead single "Good Girl Swag," a bouncy and uplifting hip hop-influenced track with a strong message for young women.

"I wanted to portray women in a way you don't see too often, which is being a professional," says Smith. The track is accompanied by a video starring Smith as a woman who goes from barista to CEO through hard work and determination. "I wanted to show how a girl can go from humble beginnings to becoming a powerful woman, which is something I think we're missing in mainstream music."

Self-empowerment through life's struggles is a common theme throughout Smith's new album. It's essential to her artistry. "I always try to empower myself personally because if I can uplift myself through the music, then I know I can help other people," she says. "Every time I play a show, somebody always tells me how my music has touched them and how it's inspired them."

Upon its release, the singer can expect a lot more fans showing up to her concerts for her inspirational message, which might just prove reminiscent of her church-going beginnings, but with a lot more synths and club beats, and Smith leading the sermon.

For both current and soon-to-be fans, she promises a tour which will run from summer to fall. "Hopefully we're coming to a city near everybody," she says. Ultimately, the musician has many hopes for her latest project, but her primary focus is connecting to listeners and inspiring them.

"I want them to be inspired, and I also want them to have something they can chill out to with their friends, play at a party, and have a sob-fest to," says Smith. "I just try to make songs for different situations, so I just hope they can take it and relate to it and enjoy themselves."

Brandon Young is a freelance writer living in Halifax. A journalism and public relations grad, he's currently working on a zine and producing a social work-focused podcast. Catch him online @brndnyng