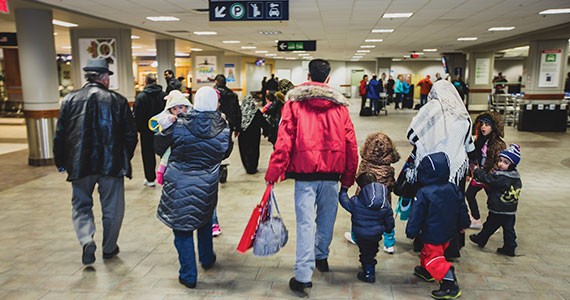 Roughly a year ago, the first government-sponsored Syrian refugees began to land in Canadian airports. Their arrival was greeted with jubilation by Canadians who saw it as a sign of a new direction for the country. Seemingly in testament to the fact that the federal government had turned over a new leaf, funding for refugee health care under the Interim Federal Health Program—which had been reduced by the Harper Conservatives—was restored.

But the improvements haven’t been spread evenly, and some services continue to languish in bureaucratic limbo. Nowhere is this more obvious than in the psychological counselling covered by the IFHP—a service that few refugees have been approved for, despite the fact that they’re eligible for it.

Under the IFHP, people who came to Canada as refugees are eligible for 10 counselling sessions in their first year to help with the specific mental health needs of refugees. The delivery of this service has been fraught across the country, and Nova Scotia is no exception.

In 2016, 1,620 people in Nova Scotia received coverage by the Interim Federal Health Program—almost triple the number from the previous year—but of those, only two have actually received any counselling.

For people adjusting to the trauma of having lived in a war zone, who are missing absent loved ones or overcoming the isolation that comes with living in a new place, counselling can go a long way to prevent PTSD, anxiety or depression from becoming overwhelming, says Carmen Celina Moncayo, head of the Immigrant Settlement Association of  Nova Scotia’s Newcomer Community Wellness Program.

When it comes to the IFHP, Moncayo says there are two issues: Too little money for interpreters, and an application process that could make Kafka’s head spin.

From the get-go, the clock is ticking—the IFHP only provides coverage for refugees up to a year from the date of their arrival (after that, they’re covered by provincial health care). But it’s a rare person who arrives in Canada ready to start counselling right away. “We have had cases where people that as soon as they arrive they say ‘I need counselling services,’” says Moncayo, “but that is not the majority.”

Moncayo says upon arrival in Canada, most people are preoccupied with the urgent questions of survival: Where their children can go to school, how to navigate the bus system. By the time they’ve sorted out their most pressing needs, months may have gone by, and the opportunities to seek counselling are shrinking. Then, the person seeking counselling has to go through a multi-step process before their application form even ends up on the right desk.

The patient “needs a referral to family doctor, the family doctor has to send a diagnosis to a psychologist, the psychologist has to meet the client, do an assessment, and then ask for approval” from the IFHP, says Moncayo. “That is a huge limitation.”

Along the way, miscommunications and mixed-up paperwork have required psychologists—who are already paid less through the IFHP than their standard professional rate—to put in hours of additional work.

LENNY MULLINS
Lesley Hartman is a psychologist working with ISANS.

“If I were not invested and passionate about this issue, there’s no way that I would ever have done it,” says Lesley Hartman, a Halifax psychologist who’s worked with ISANS to develop culturally appropriate psychological services for refugees.

“It’s required hours of me paying an office manager to call [the IFHP] and follow up...it’s cost me more than I’ll ever make. Most psychologists are not going to be able to afford to do that.”

Nevertheless, ISANS managed to set up a network of psychologists with the right training, including Hartman. But that alone doesn’t help clients who aren’t actually able to communicate. Professional interpreters are vitally important to the success of the counselling provided by the IFHP, but the program barely pays enough to attract them—$28.95 per session, which could easily be well over an hour of work once preparation is taken into account. “Our interpreters decided that they couldn’t work for that amount of money,” says Hartmann.

By contrast, the Nova Scotia Health Authority pays interpreters working in other clinical settings a minimum of $50 per hour for a two-hour booking. This barrier was significant enough that ISANS—which coordinates between physicians and psychologists—temporarily suspended referrals from doctors until interpreters could be found. (They eventually were.)

But in the summer of 2016, a new roadblock emerged: Psychologists now have to submit an assessment of the client to the IFHP before funding is approved. Before this, the psychologist could apply for funding with just a doctor’s referral. Hartman, who also sees clients through federal programs that cover services for veterans and members of the RCMP,  says the assessment is a step that’s unique to refugees.

In an emailed statement, the Department of Citizenship and Immigration wrote that the assessment was introduced by the IFHP “to meet industry standards” and is required by other health benefit programs. It also said the turnaround on approvals for counselling services was less than the two-day maximum, although employees processing claims may need more time to gather all the necessary information. But as the case of Nova Scotia service providers has shown, that bureaucratic back and forth can take closer to 12 months than two days.

It’s not as simple as refugees seeking help through the provincial health care system, either, says Moncayo. That imperfect system is setup to deal with emergencies, such as potential suicides, and that’s not the greatest risk for refugees. Not to mention, the provincial system faces many of the same issues with the language barrier that the IFHP does, especially when it comes to booking appointments and making referrals.

All of this has created delays long enough to push some refugees out of the window of coverage provided by the IFHP. By the time they get approved for counselling, they’re no longer eligible for it.

“That’s actually happened, where government-sponsored refugees were finally approved after a year of back and forth of approval, and the next day is the anniversary of their landing date,” says Hartman.

Tim Holland, a physician at Halifax’s Transitional Health Clinic for Refugees, says there is a bright spot on the horizon. Nova Scotia is currently working on ways to improve how provincial mental health programs serve refugees, he says, but for the moment the best way to meet the specific needs of refugees is through the psychological counselling that only the IFHP (in theory) provides.

“This and dental needs are probably the two biggest gaps in refugee health...that aren’t being met by our current system,” says Holland.

Whether the refugees who want psychological support get it is important—and not just because addressing mental health issues as they come up can prevent them from becoming emergencies. It also reduces the risk that the welcome refugees were shown a year ago at the airport will be betrayed by the reality of life in Canada.

“It leaves a lot of refugee patients feeling like our country just doesn’t care about them,” says Holland. “If we want to be able to show that we care about these patients, we need to make sure that we take care of their mental health needs, as well as their physical health needs.”

Journalist Robert Devet remembered as champion of the people

The top 5 “Halifax's freshest memes” from the past 5 years