Meet the man behind the north end’s most life-affirming street art. 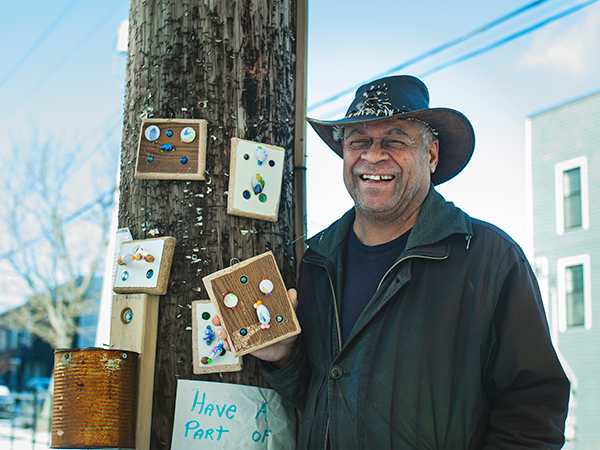 We're all familiar with tourist tchotchkes—those mass printed trinkets you suspect have the city names swapped out all over the eastern seaboard, lobster beer cozies, "Grandma went to [insert town here] and all I got was this t-shirt" t-shirts. These staples will always have their place, of course. But for a truly unforgettable piece of memorabilia, look no further than Reid K. White's art.

Hung on a handful of telephone poles, White's unique handcrafted pieces feature beads, stones, ceramics, metal, colourful plastic embellishments—whatever he has lying around, really. There's usually a donation box nearby (if it hasn't been swiped) and a message—wishing that tourists, or anyone who loves heartfelt art, will take this reminder of Halifax home with love.

White lives in the north end of Halifax and his displays tend to cluster there too: the display near Joe Thomeh's Kwik-Way on Cornwallis was well stocked recently. If you're lucky, you have a couple hung in your home. They'd make excellent stocking stuffers, with each piece being slightly larger than the average deck of cards.

White began this charming hobby years ago and, lucky for all of us, it stuck. "I used to work with the railway in passenger service," he says. "When people came into the city in the summer, I made them to offer as a little memory of Halifax."

He started putting them on phone poles with an accompanying container for goodwill donations. But, as you'd figure, this set up isn't always secure. "By Quinpool, the students used to take the donation boxes," he says. "I didn't mind, it gives me something to do, it keeps me busy." White turns 70 on December 30, and says he's slowed down production somewhat. "I don't want to make an obligation of it. I'm getting old now—can't stop time."

"I don't get that much money, but it's a nice surprise when there's something there. I put some cushioning in the containers so people can't hear if there's any money in there. If they can hear, they're tempted to take it down." Vandalism doesn't deter White, however: "I'll try it again, it doesn't take much to make them," he says. "The thing is to take something that's worthless, a useless piece of wood. It's surprising what you can do with that."

In White's case, he's created something pure and good during a time we all could use a little bit of extra love.

White has given his art as gifts to his five grandchildren and his friends. He perfected his woodworking skills renovating his former home on Belle Aire Terrace. His art touches folks and he says this appreciation means a lot to him. "One girl got in touch with me, she'd lost a friend and she got me to make a special one to remember her friend who had passed away," he says. "One Citadel High student thanked me for doing them, she said she had a clothesline and it was almost full of them."

Sometimes White will see foreign currency in his donation boxes, proof that tourists have taken his message of love back home with them. "I say maybe these will be worth something, or collector's items when I die," he says. "I like to make a little difference in the city."