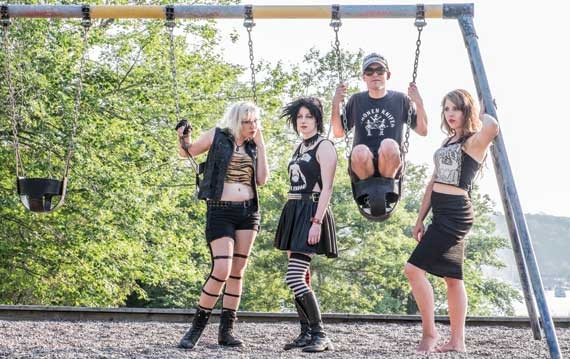 The Mankos don't fuck around. Well, not when it comes to their music. The four-piece slut-punk act has existed since 2012 in different iterations, swapping out drummers in what frontperson Sam Horak calls "onenight stands." Horak believes the revolving door of drummers is good luck, though: "Look at The Germs," she says. "The Ramones, Spinal Tap!"

As the band returns from a hiatus, its latest line-up change sees Maria Brine (The La La Loverings) taking over following bassist Samantha Callaghan's departure and Coleman Johnston (The Scoop Outs) as the latest artist behind the drum kit. Johnston plays in countless other bands, but doesn't plan to be just another fling.

Horak says the process of finding The Mankos' new members was organic–almost too easy. A chance encounter between the band and Brine's partner during a show at Jacob's Lounge led to an immediate connection. As Brine recalls, "I was at work and suddenly got messages from four different people being like 'Oh my god you have to play bass for The Mankos!' and I was like OK guys, I'll be at Jacob's in an hour."

The addition of Brine to the line-up means some changes. "I want to use more pedals and give us a little crunchier sound," she says. "We're also going to dress up more!" Horak is quick to reiterate that the heart of the band won't change: "We'll keep the theme–sex positive songs, songs battling rape culture and taking down the patriarchy." a