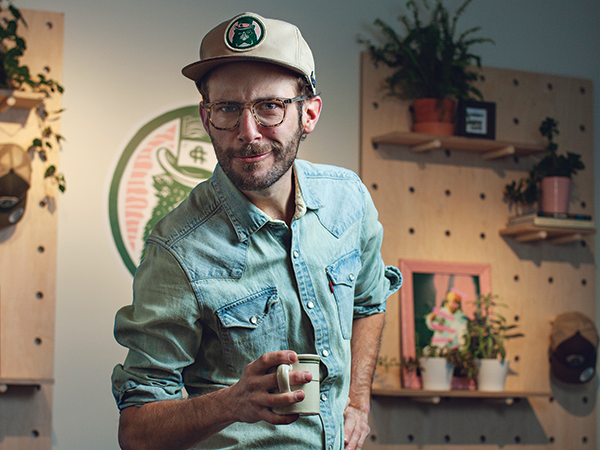 There's a new resident on Quinpool Road, and they're ready to kick up their heels and meet everyone. Taking over the old location of Relish Gourmet Burgers, Cheeky Neighbour Diner pays tribute to old-fashioned brunch classics while offering a playful spin on the iconic diner genre.

Drew Voegeli, owner of Cheeky Neighbour and former owner of Relish, decided to close the burger joint in early 2019 to reinvent the space. "Relish was a great experience, but it was time to cut the cord," Voegeli says. "I'm a millennial—we don't do anything for more than seven years, do we?"

He then began concocting his next venture: Cheeky Neighbour, a modern diner for families and students who live in the area. He wanted to create a space where his own goofy, down-to-earth nature would rise and shine.

A cat wearing a monocle and top hat, the restaurant's official logo, is painted near the entrance. "To me, the cheekiest neighbourhood character is a wandering cat," Voegeli says. "So we took that concept and made it the character of the restaurant." There are several hidden cats, and references to cats, sprinkled throughout the diner for guests to discover. (Keep an eye out for a black feline spray-painted onto the bottom right of a landscape painting.)

"I want this to be kind of a silly space," says Voegeli. "I'll moonwalk to a table, once you get a couple coffees in me. There's no script here; we just want people to be themselves."

Towards the back of the diner, two wooden structures with peaked roofs each house a booth—Voegeli's favourite design flourish, the houses were built with reclaimed wood from the 1800s, and an old streetlight towers over them, providing an extra spark of neighbourhood charm.

In many ways, Cheeky Neighbour is an homage to home and community. When Voegeli thinks about the atmosphere he wants to cultivate, he remembers the comfort he felt when his family would gather around the table for a meal.

"This place is about togetherness and family," Voegeli says. He hopes to see families return to the diner over the coming years, perhaps even growing up alongside Cheeky Neighbour.

The menu covers the classics—bacon and eggs, eggs benny and breakfast skillets—while also providing several sillier, yet delicious, brunch items. For example, the potato waffles are made from tater tots smashed in a waffle iron and topped with crème fraiche, smoked salmon, pickled onions and capers.

Beyond brunch, Cheeky Neighbour offers a hefty lunch and dinner menu that includes fried chicken, fried cauliflower, poutine, vegan enchiladas and, of course, burgers. "We didn't forget how to make burgers," Voegeli says. Everything is made in-house and sourced locally when possible. The diner serves Anchored Coffee, and has several Halifax-based craft beers on tap.

"I want people to leave happy," says Voegeli about Cheeky Neighbour. "You don't go out to eat to have a bad time. It's always about having a positive experience—that's what we're trying to create."