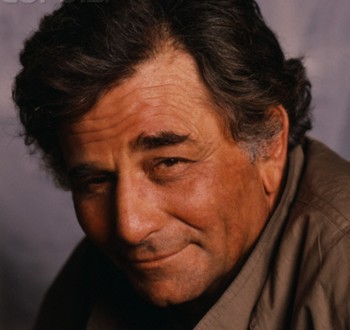 “The most wonderful man I ever met,” says Bill Morash, who worked with Peter Falk on A Town Without Christmas (2001) and Finding John Christmas (2003), both TV movies shot in Nova Scotia. Morash was Falk’s stand-in. “We both got the same one eye,” says Morash. “They used to call me the Peter Falk of the area. His personality was plus.” Falk, who most will recall from his years playing disheveled TV detective Columbo, died at age 83 last week. He had been a working TV and film actor since 1958, starring in pictures as diverse as It’s A Mad, Mad, Mad, Mad World, John Cassavetes’ drama A Woman Under the Influence, The In-Laws, Murder By Death, Wim Wenders’ Wings of Desire and The Princess Bride. It was reported in recent years he suffered from Alzheimer’s disease. “He was just lovely and sweet,” says Coleen Ryan, who did make-up for the actor on Finding John Christmas. “He was such an icon, right? No matter what, he was always Columbo. I couldn’t get past it. But he was an easygoing guy, from our point of view. He seemed wonderful.” Nova Scotia actor and musician Cassie MacDonald performed in Finding John Christmas, and like Ryan says his bigger-than-life persona was inescapable, even though she didn’t act opposite him in any of her scenes. “I recall feeling that even in person, as himself, he had an air of elusiveness just as Columbo did to his unwitting suspects. Maybe that character had pervaded his persona, or maybe it was so memorable that it was a challenge for me to see him as anything else.” Morash remembers Falk running off downtown sets between takes to go say hello to people passing, to kiss babies and have his picture taken with them. Morash also recalls a time when they were both in a Tim Horton’s getting coffee, looking alike. A woman at a nearby table kept looking over at them. “He points at me,” says Morash. “So I say,‘What the hell you pointing at me, Peter?’ [Falk] says, ‘You’re better looking than I am, let’s just see what happens.’” Sure enough, the woman comes over to Morash and says, stuttering, “Hello, Mr Columbo.” Morash, doing his best Peter Falk impersonation responds, “The name’s Falk, sweetheart. Columbo’s the stage name.” Falk, startled, says, “Christ, do I really say that?”