The city’s eviction of Occupy Nova Scotia demonstrates the cowardice of city officials, who hold themselves to a different standard of law. 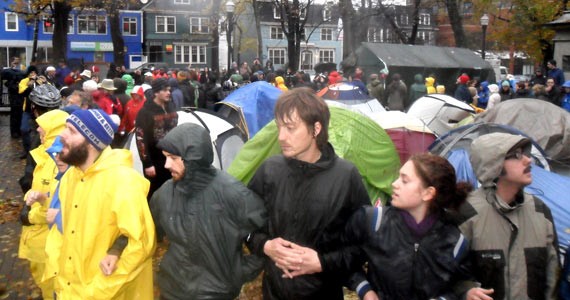 The city's Remembrance Day eviction of Occupy Nova Scotia was cowardly and shameful.

The Occupy group had demonstrated a spirit of cooperation and compromise. When concerns were raised that their Grand Parade encampment would take away from the Remembrance Day ceremony at the Grand Parade cenotaph, the Occupiers listened, consulted with veterans and reached a decision that won them great goodwill in the community---they would leave Grand Parade for a few days, then come back after.

What was city government's response to that spirit of compromise and mutual respect? To issue an eviction notice in the middle of a driving rain storm, without seeking further discussion or possible compromise, and siccing dozens of cops within two hours to enforce the order.

And the symbolism of evicting a political demonstration on Remembrance Day is not lost: Veterans did not fight for political dissent to be squashed.

The real cowardice of the eviction, however, is demonstrated by how the order was arrived at. Mayor Peter Kelly told me that city council approved the eviction, sort of, at last Tuesday's meeting, specifically, during the in camera, secret part of the meeting. (Hear the interview at thecoast.ca/bites.)

But, I objected, items to be discussed in closed session have to be publicly agendized. Oh, it was agendized, said Kelly: during the secret meeting.

Step back and think about this: We have public disclosure laws so that council can't conduct business in secret without publicly agendizing it. But council can agendize a matter for secret discussion in secret. This is all hunky-dory, said Kelly, because the secret discussion will eventually be retroactively placed on the public agenda, when council approves minutes for the meeting, maybe a month after the fact.

Secretly adding things to a secret agenda makes a mockery of the rules requiring public notification of secret discussions, and Kelly knows it. But, as Kelly himself said, that's "how it's [been] done," repeatedly, for years. Halifax city council is in near-continuous contempt of its own rules of procedure, and of the city charter. There's no telling what else they're improperly discussing through these secret discussions.

Typically, a council decision made in secret still has to be ratified in a public vote. But the Occupy eviction vote wasn't held in public because, said Kelly, it involved "operational matters" that somehow don't require a public vote.

If councillors wanted to evict the Occupiers, they certainly had the power to order it. But instead of owning the decision---popular or not---councillors are playing a game of linguistic cover-your-ass: We didn't approve the eviction, they're now saying, we reaffirmed the no-camping-in-parks bylaw---we wanted the eviction served on Remembrance Day, but not enforced on Remembrance Day. Some councillors say there was a secret vote, some say there wasn't. This week council voted not to hold a public discussion of the issue, leaving its own decision-making hidden behind a cloud of bullshit and deceit.

Contrast council's processes to that of the Occupiers, who are still meeting every day at 7pm in Grand Parade for their General Assemblies. Tuesday, still reeling from Friday's eviction, the group discussed legal support for those arrested, strategies for retrieving property taken by the police, finding homes for those protesters without and how the protests will proceed into the future---no decisions were made, but the group is exploring rotating encampments around HRM.

These discussions happened in a completely equalitarian framework: anyone present could raise a concern or ask a question, and was treated respectfully. From time to time they'd make sure everyone present agreed to the way things were progressing. The entire meeting was public---the press was present, as were five police officers, one of whom was annoyingly photographing the participants with a bright flash camera. Throughout, the Occupiers conducted themselves with poise, decency, mutual respect and courage in the face of police and press scrutiny.

Violating the no-camping-in-parks bylaw is, well, violating a bylaw, legally akin to not salting your sidewalk or having an unsightly premises. They're real infractions, to be sure, but they're not, ya know, diverting millions of dollars of city funds to a favoured concert promoter or preventing old people from getting their legally entitled inheritance, both of which Peter Kelly has done.

The concert scandal is now old news, but let's recap what happened: Peter Kelly signed improper loan documents, the documents were not approved as required by the city's legal department, Kelly never notified city council as required and the loans violated the city charter. Some $5.4 million was transferred to concert promoter Harold MacKay in violation of the city's financial controls, and at one point the risk to the city was an astounding $6 million. The city is still on the hook for $359,550.

Despite an auditor general's report that placed Kelly as a responsible and knowing participant in the concert loan improprieties, he has suffered no consequences. Council could not even muster the courage to slap Kelly with a symbolic one-week suspension.

Less well known, sadly, is Peter Kelly's disgraceful performance as the executor of Mary Thibeault's will. There are 18 heirs---mostly elderly people themselves---who have been waiting nearly seven years for resolution of the probate case that will split a half million dollars between them. Such probate cases usually take about 18 months for resolution, but Kelly has delayed, has ignored letters from the court, had to be prodded with court orders and through tearful letters from quite elderly relatives of Thibeault to the court, and still Kelly has not met his legally required responsibilities.

The Coast is the only media outlet to report on Kelly's disgraceful, dishonourable performance as executor (see "Peter Kelly's failure of will," March 24), and so the story hasn't gotten the play it deserves.

Maybe other media agree with Kelly's objection that the Thibeault will is "a personal matter." But that's nonsense: as executor, Kelly is an officer of the court, a public officer of the court. Moreover, other media have no problem reporting on divorces, problems with alcohol, bankruptcies and so forth, which are clearly more "personal" than managing the distribution of half a million dollars through the courts.

It's hard to come up with even a weak argument that the botched probate case shouldn't be a very public matter giving testimony to the rotten, debased character of a public official.

But that's how it goes in this city. Break the city charter and city financial controls, lose the city $360,000, put the taxpayer at risk for $6 million, screw a bunch of old people out of half a million dollars? Walk home free. Violate Bylaw P-600? Face immediate action by 40 cops.

At their heart, the Occupy protests are about how the rich and powerful cheat the system and face absolutely no consequences for their actions---whether that's destroying the global economy, improperly tapping the city treasury or kicking old people---while everyone else has to play by a different set of rules.