Return of the Tupperware Remix Party

The weird and wacky dance band is back from the big city to help you ring in 2012. 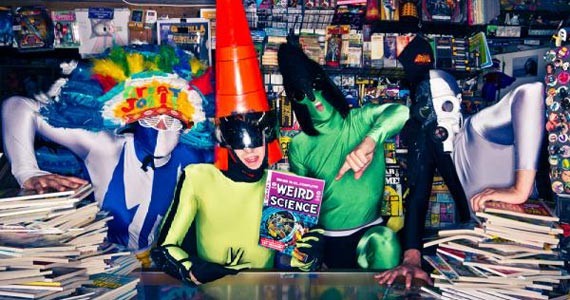 Halifax's zany, pylon-wearing, spandex-loving Tupperware Remix Party picked up and moved to Toronto after their last show here in early November, but they aren't the types to be forgotten, hence why they're back in town to create end-of-year dance hysteria in the north end. So far since moving to the big smoke they've completed a four-week residency at Queen Street's Bovine Sex Club and deployed their Mobile Fun Unit (a wireless set up for busking and starting strange spontaneous street parties) onto the big, busy streets. "We have been making lots of connections and are excited to see where things will take us next," says TWRP's guitarist Lord Phobos (AKA Greg Ryan). "The crowds at the Bovine grew exponentially each week, perhaps a result of our shocking busking displays at Toronto intersections." With national touring in the future and constant new material percolating, there's no doubt TWRP with make a huge, neon splash in the 2012.