A showcase of emerging artists shows what magic awaits when you lean into your instincts. 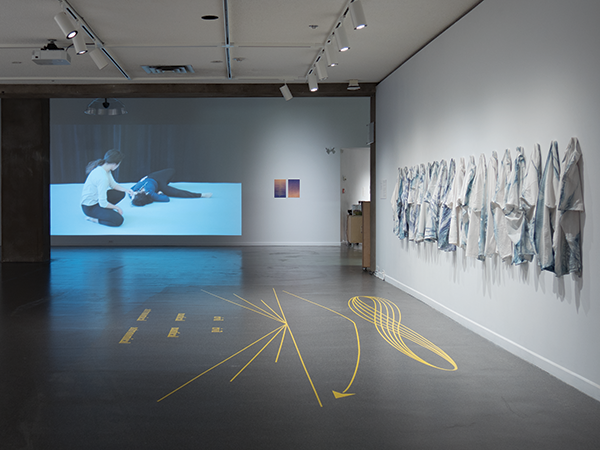 A gut feeling can hit us when looking at art. While some work takes serious contemplation, often our response is an immediate one, an instinctual feeling that tells us this is beautiful; this is ugly; this is gross; I don't get this but I can't stop looking at it.

This instinct is crucial in our viewing of art. And, for many artists, it is also integral to the way their art is produced.

In Gut Feeling, curated by Angela Glanzmann and Wes Johnston, artists allowed for a shift in control when making their work.

Shaya Ishaq's graphic weavings are suspended from the ceiling, the slim textiles becoming monumental, sculptural, as they hover above the gallery floor or melt into bent mirror. Meditating on the words of author Octavia Butler while operating her eight-harness floor loom, Ishaq shifted designs whenever she sensed a consistent pattern emerging, allowing Butler's words to inspire the flux and trajectory of the weaving.

Nearby, artist Lou Sheppard shows a video projection that towers over the space. Meanwhile, a row of t-shirts dyed spotty blue sit above yellow lines on the floor, the latter marking horizon lines, points of light—and the names for these times. Exploring the idea of dawn and dusk as queer times of day (beyond a binary, neither night nor day), dancers improvised movements based on Sheppard's parameters, while Sheppard dipped t-shirts in photographic fluid that exposed and turned blue as the artist wore them while walking at dusk and dawn.

For other artists, this gut feeling came down to a trust in their collaborators. Revisiting the hierarchies embedded in conceptual art (artwork whose form is the idea rather than the finished work—think scores and instructions, things that can be executed by anyone), Elyse Moir and Emily Davidson subvert this power dynamic of author and worker: The duo collaborate fully to create a series of post cards of Nova Scotia scenery painted in space-dream palettes of red rocks in green oceans, pink waves receding into black hills—with copies available for visitors.

In a similar exploration of art and labour, Elise Boudreau Graham collaborated with her father Russell Graham, who previously worked as an electrician at the university and gallery. Elise has traced electrical conduits in the wall pointed out to her by her father, and etched Garfield into a mirror proclaiming an anti-capitalist hatred for Mondays.

Many artists in the show take a similarly humorous and playful approach, from Lindsay Dobbin's excavation of artwork they made as an 11-year-old to Stephanie Yee's fountain filled with sweet and sour sauce.

A gut feeling is also one of trust—one the collaborators share with one another and that the curators placed in the artists. Commissioning new work rather than curating existing pieces, Glanzmann and Johnston saw themselves more as facilitators than curators, allowing the work to mutate and develop like bacteria in the gut—developing into a lively exhibition of emergent artists.