The Urban Pipes showcase should've felt like a peanut butter-tunafish sandwich but instead was much tastier. 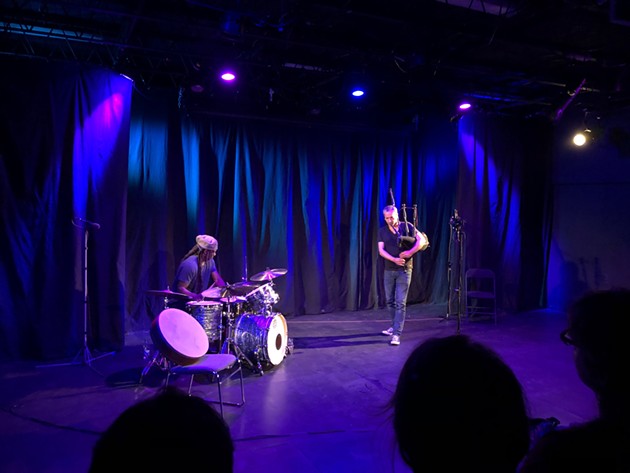 Silence. One musician sits behind his drums, eyes closed. The other stands six feet away, his bagpipes sticking out from under his arm. The room is still. A faint sound is heard—but maybe not. After a second, another faint sound is heard. What is that? Then again, a little stronger. It’s the faint hiss of the hi-hat, its pedal gently pressed by percussionist Hamid Drake’s bare foot. Erwan Keravec crouches, clutching his bagpipe under one arm like a football.

He reaches up with his other arm to plug one of the pipes with a finger. He squeezes. The bagpipes let out a croak.

The performance at the Bus Stop Theatre on Tuesday Sep 17—the season opener for the adventurous live music organization suddenlyLISTEN—was an interesting one. Two internationally known improvisational musicians combined the sounds of bagpipes with drums.

The idea sounds like a peanut butter and tuna sandwich. The reality was much
tastier.

The musicians played their instruments in interesting ways—Drake using a big red cloth over the drum set to muffle them, Keravec plugging the pipes with his finger—to make all kinds of sounds: Loud sounds, faint sounds, long sounds and short sounds.

The noise could be felt.

It’s like the musicians were summoning some chaotic spirit from the ether. While they played, both kept their eyes closed. Before they finished with a simplified piece—using only a frame drum and a tiny reed flute—Drake spoke to the attentive crowd of about 30.

“A vibe was felt immediately between us,” when he met Keravec two years ago, he said. He added that it has been a joy to perform with Keravec, and the unlimited choices as a percussionist floating “in the ocean of his sound.”

They performed their final piece, two people communicating organic music with their eyes closed. Throughout the night they have matched each other’s energy.

As the drum strikes soften, the double-reed whine fades. Silence.