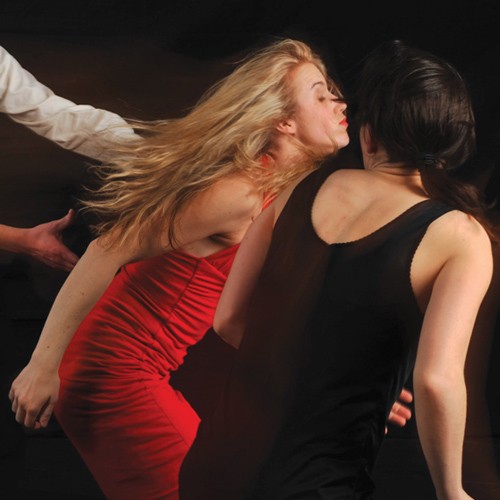 Conservationists take note: If you want people to pay attention, partner with an artist. Lisa Phinney's Analogy for Solid Bones, inspired by the behaviours and plight of the loon, whose ecosystem is being destroyed by mercury poisoning, is a provocative and ultimately heartbreaking dance piece, subtle and yet strong in its message.

Seven dancers dressed in quiet shades of black, grey and white (including Andrew Turner, who I recognized from this summer at Montreal's Piss in the Pool—a series of dances in the bottom of an empty public pool) preen, flirt, mate and fight with the raging hormones of a late-night house party on a hot summer's night. Phinney draws graceful parallels between the two species' behaviour, without becoming cliche or too Animal Kingdom-heavy in her approach.

Sexy and at times humourous (especially when you realize how ridiculous human mating rituals really are), the mood shifts, as the dancers struggle as if there are layers of weights added to their backs. By creating this sense of empathy, Phinney has set us up for a sorrowful finale. Analogy turns into one of the darkest pieces I've seen Live Art present.

Set and sound also sets this grey tone. Peter Dykhuis' set design—large silvery branches sweep down like trees over a lake, the light rippling like waves on the ground—is minimal and gorgeous. For her soundtrack, Phinney also employed Halifax talent: narration by spoken word artist Ardath Whynacht, and music and sound design by Sageev Oore, with help from brother Dani. The sound is based on the rhythm, texture and melodies of loon calls, but the actual sound of the loon call isn't heard until later in the piece. But there are subtle reminders everywhere: when Oore holds a certain note on the piano, in dancer Susanne Chui's coquettish giggles.