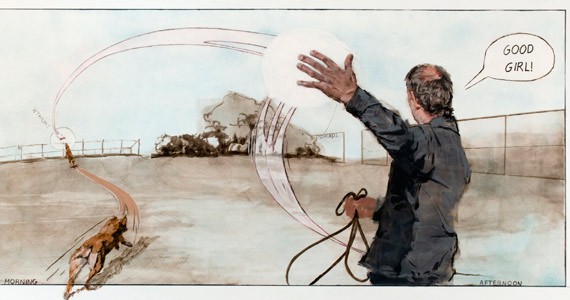 Every piece of art tells a story. Mathew Reichertz' touring exhibition Garbage is a giant comic book unfolding on the walls of the Saint Mary's University Art Gallery. The artist cleverly shares his strange, engrossing adventure with his north end Halifax neighbours as a mysterious couch shows up on the curb. Reichertz' work is beautiful, funny and majestic. The panels are huge, up to 17 feet in height, which gives the audience the illusion of walking into a comic strip. In one panel, the picture of the neighbour who discovers the couch is disguised; he's pixilated like a blurred image on television. The best panel by far is his flashback sequence—Reichertz displays his technical ability by using only shades of black to convey a scary, sad memory in Montreal. Alongside Reichertz' work is Emily Davidson's impressive XO Planet, a comic strip following the wise, timely observations about Canadian society told by an alien from a feminist planet. Her work can be seen after you pass the giant barking dog.