2b Theatre's latest play is a beautiful elegy. 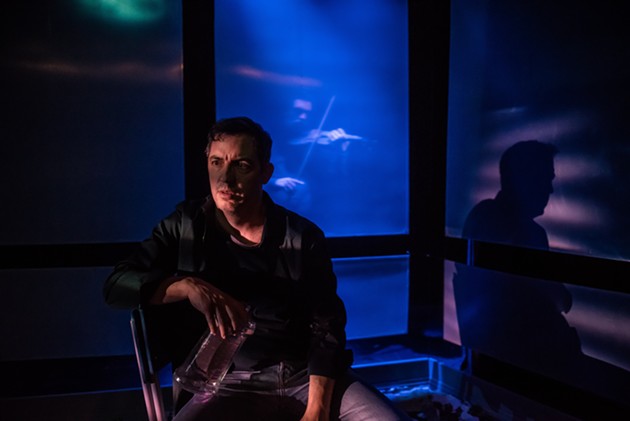 Before the lights come up, a man (Jacques Mindreau) emerges from the wings with a flashlight and a violin, plays a brief tune in the near dark, and then exits. A second man (Anthony Black), our narrator, enters to tell the story of his chance encounter with a piece of music in an abandoned theatre and the man who created it.

Black's character struggles to explain the depth of his experience hearing John Morton's composition, and Mindreau, never speaking, plays the obscure composer, appearing and disappearing throughout the show in half-light and wafts of music. Adapted with skillful economy by Black from a short story by Yann Martel, the script is literary and intellectual as it explores the vastness of what is inexpressible: from the humanity of art to the pain of war. Threaded throughout are images of the horrors of the Vietnam War: like art’s demented twin, it is presented as unspeakable at its core, meant for experience and not explanation. But that does not keep the thinkers, the artists, poets, musicians, from trying to understand.

Co-directed by Black and Ann-Marie Kerr, the play's tone is deeply mournful, almost elegiac, but gentle at its core. The projection and lighting designs by Nick Bottomley are their own poetry, as is the gorgeous music composed by Mindreau with Aaron Collier. There are many touching moments of levity and humour, always to serve a driving idea: of the loneliness of striving and never attaining; or attaining only to discover what was lost along the way. I had it all there; so; within reach of my hand.