Review: Portrait of a Lady on Fire is a barrage of tenderness

Céline Sciamma’s period romance paints a picture of feminine love and camaraderie in the absence of men. 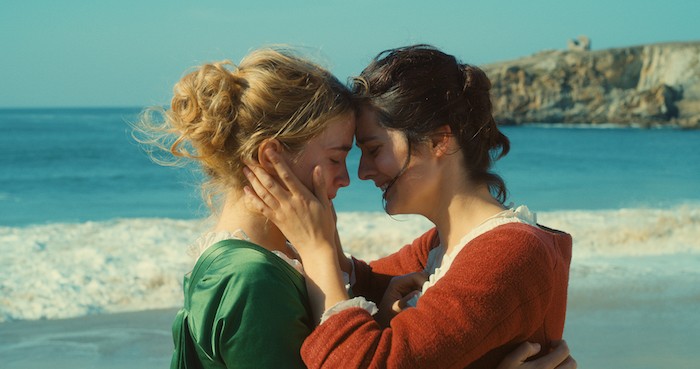 Portrait of a Lady on Fire takes place on a secluded island in 18th century Brittany, France, where Marianne (Noémie Merlant), an   ndependent young painter, is commissioned by a Countess (Valeria Golino) to paint a wedding portrait of her daughter, Héloïse (Adèle Haenel).

As Héloïse has refused to pose for previous painters, Marianne masquerades as a walking companion for the Countess’ troubled daughter, carefully observing her so she may paint her in secret. As she gains Héloïse’s trust, Marianne finds herself falling in love with her subject.

This latest offering from French filmmaker Céline Sciamma (Girlhood) first bewitched audiences at the 72nd Cannes Film Festival, where it won Best Screenplay, as well as the Queer Palm—a first for a female director.

Like the waves that pummel the film’s rocky Breton coasts, Sciamma’s screenplay is a barrage of tenderness, humour, music and colour that delivers again and again.

For its witty, sparse dialogue, idyllic setting and its incorporation of cultural staples like Vivaldi and the myth of Orpheus and Eurydice, viewers will feel they’re watching an adaptation of a French literary classic.

Portrait of a Lady on Fire is a visually arresting, wholly cinematic experience. Each shot possesses the richness of one of Marianne’s oil paintings—and far more is revealed about these characters through their actions than through expository dialogue.

The film accomplishes something rarely seen in period pieces by giving an intimate glance into the lives of women, totally independent from those of men. This is shown not only through Marianne and Héloïse’s romance, but through their friendship with the maid, Sophie (Luàna Bajrami).

With its relentless screenplay, these women’s reserved but passionate performances, and Sciamma’s picturesque direction, Portrait of a Lady on Fire will surely continue captivating audiences wherever it plays.