Review: Run this Town runs out of breath

Though its sprawling plot is never quite focused, Ricky Tollman’s look at Ford Nation is slick and entertaining. 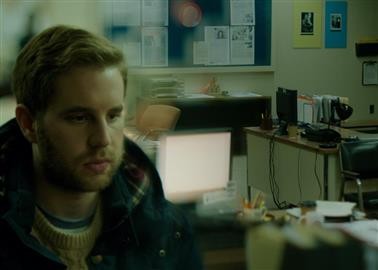 Run this Town wants to say a lot of things. Unfortunately, it says nothing at all.


A slick and entertaining hot-mess of a tale from writer-director Ricky Tollman (Enfant Terrible), Run this Town follows reporter Bram as he tries and fails to land the story that led to the downfall of Rob Ford. (Watching the action unfold, it’s never out-of-mind that Toronto reporter Robyn Doolittle—the lone woman journalist on the beat and one of the first to cover Ford’s substance abuse—is  erased from this retelling).

Fresh out of journalism school, Bram lands a job at The Record, where he is relegated to writing fluff pieces about the best brunch spots. But, he is eager to show his bosses (Scott Speedman and Jennifer Ehle), that he can do more.

Lewis, by the way, gives a spot on performance as the former mayor—once you get past the bizarre prosthetics and makeup that make him look more like Fat Bastard from the Austin Powers movies than Rob Ford.

Worlds collide after a man claiming to have a video of Ford smoking crack with gangbangers contacts both camps: The video is real, but so is his price—he wants $15,000 for it and the race to get the jump drive containing the incriminating video ensues.

Bram follows the steps described by Toronto Star reporters Robyn Doolittle and Kevin Donovan. Watch for the truly depressing moments where Bram’s bosses discuss the story’s merits in terms of “clickability” rather than actual news value to their readers.

It’s admirable that Tollman, who is from Toronto, doesn’t shy away from the other notorious Ford scandals, including the groping incident that led to his infamous quip about having “plenty to eat at home.”

As the closing credits whiz across the screen, audiences might be left wondering why Tollman chose to tell this story that seemed to go nowhere.

Is it a commentary on disenfranchised millennials? A bleak reflection on the state of modern newsrooms? Perhaps it’s a cautionary tale about history being doomed to repeat itself if we don’t learn from our mistakes.