Rings Through Water is part ode to water protectors, part call to action. 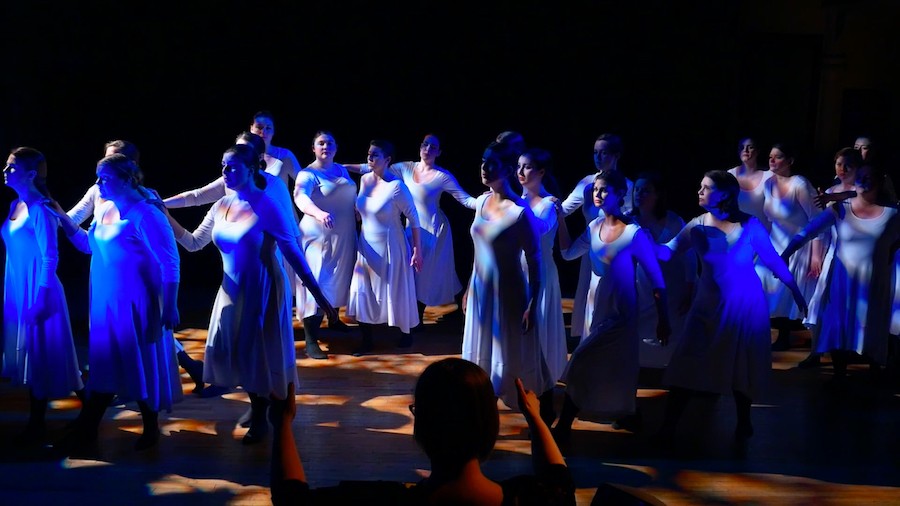 The energy before a dress rehearsal is always a little bit frantic. Nothing starts on time as lights, sound, and costumes get adjusted, performers confirm their places, and the director scans the room for anything out of place. Then the lights go down, and the heightened silence fills the room with anticipation.

Xara Choral Theatre is about to take the stage, and they have something to say.

Rings Through Water is the choral theatre company’s latest show, and it is one that has an urgent message to impart: Water is sacred.

A companion piece of sorts to the show Fatty Legs (which explores the impact of residential schools on Indigenous populations), Rings Through Water is a collaboration between the choral group and several renowned Indigenous artists. The collaboration has resulted in the three-part performance that offers Indigenous perspectives on our relationship to water.

“[Fatty Legs] was about reconciling the truth of the past,” says Xara’s Artistic Director Christina Murray. “And this show is about now. It’s about today and the work we have to do.”

In part one of Rings Through Water, Deantha Edmunds takes the stage, backed by the impeccable Xara choir, in a polemic about the ill treatment of our waters. Edmunds is an Inuk classical soloist and storyteller, whose magnetic presence and powerful voice guides the audience through a story of wonder, pain, and ultimately the search for ancestral wisdom through a relationship to water.

Sarain Fox, an Anishinaabe dancer, who choreographed the choir’s movements for the production, joins part two as a solo dancer. This section begins as a celebration of the life-giving powers of the river, and slowly evolves into an elegiac mourning ritual.

In a stunning section that could have lasted one minute or one hour, the lifeless dancer lays on the ground while each woman in the choir takes turns offering the body a gentle touch. It all takes place in silence and—juxtaposed with the wall of sound that came before—is moving beyond measure.

“It wasn’t very long ago that Indigenous women were not allowed to have a voice or a place in society,” says Fox. “For me, the show is about continuously making the commitment to speak the truth, to standing up for all of those who don’t have voices, including our planet.”

Murray adds: “This show is very much about saying publicly that Indigenous knowledge and Indigenous teachings are, in my mind, the way forward in this crisis we are in in our country and in the world, both environmental and social.”

The show’s final part is a call to action, a protest to protect what is sacred. It is also a display of strength and resilience, and the women of Xara, along with their collaborators on this project, have put it together with grace, beauty, and an arsenal of truths.

“There is a horrible feeling of powerlessness,” says Murray, “and this is the only kind of power I have as an artist.”

Fatty Legs has been performed over 100 times across Canada, and Rings Through Water will soon embark on a tour across the province. In 2020, Xara has been invited to the World Symposium on Choral Music in New Zealand where they will perform excerpts from both shows.

Rings Through Water runs August 23 to 25th at 8pm at the Maritime Museum of the Atlantic, 1675 Lower Water Street.