Film review: The Killing of a Sacred Deer

Follow-up to The Lobster is just as weird—and more unsettling. 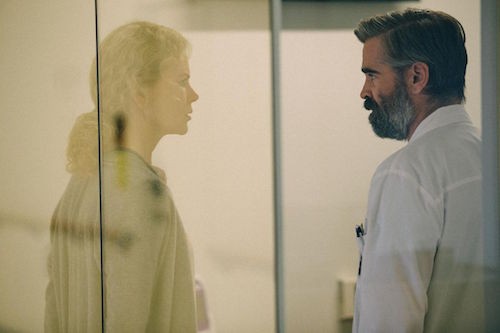 Yorgos Lanthimos’ delightfully bizarre satire The Lobster—a world in which being single was a crime punishable by being turned into an animal of one’s choice—was a highlight of 2015, winning multiple awards at Cannes and pulling an Oscar nomination for Best Screenplay. Anticipation is high for the follow-up, The Killing of a Sacred Deer, which again stars Colin Farrell as a monotoned depressive type, this time a heart surgeon. He’s been secretly meeting with a teen named Martin (Barry Keoghan) for months, making up outlandish stories whenever someone sees them together—no one ever really cares—and so you might think this is leading to some sort of relationship issue, you’re way off: Farrell’s Steven, drunk at the time, was responsible for killing Martin’s father in surgery. So Martin has a proposition: Kill one of your kids and we’re even. If not, they’ll be afflicted with a series of ailments: Paralysis, refusal of food, bleeding from the eyes, death. Fun!

Nicole Kidman, an Academy Award-winning actor who just pulled off one of the top performances of her lifetime in Big Little Lies, finds herself disrespectfully billed under Farrell for the second time this year (the first was The Beguiled) as his wife Anna, whose support of her husband starts to falter when the truth comes out. (At least her nude scene is balanced out by Farrell’s.) Keoghan, reminiscent of a young Miles Teller in another Kidman vehicle, Rabbit Hole, turns his earnest boy who just wants to please into a legitimately scary villain. In fact, everyone speaks in the same perfectly enunciated flat tone, no smiling, no laughter, like a horror film directed by Wes Anderson. It gives the movie an otherworldly, sinister vibe and makes the violent bits—to Lanthimos’ credit, even those are fucking weird—that much more shocking. While it lacks The Lobster’s conceptual dazzle and social commentary, The Killing of a Sacred Deer is a slow-boiling, sophisticated art-horror film from one of our most inventive directors.

The Killing of a Sacred Deer