Rich Aucoin
We no longer have a monoculture. The viral videos of late aughts were the last vestiges of ubiquitous shared experience. Even the biggest pop stars of today can be overlooked by large numbers of the population because of our highly specialized subscribe culture. So our water-cooler conversations now are left as a series of recommendations to one another rather than a discussion of the shared cultural experience.

I think it’s helpful for musicians and other culture creators to digest as much as they can as their “research” for their own creations, even if it’s at a subconscious level. (I mean, in the end, your subconscious is doing the most work anyway!). So I was really looking forward to this tour to give myself hours and hours of guilt-free musical analysis. I was deep in one of these sessions when I realized that the road I had been traveling on was steadily declining to be characterized as a road.

Rich Aucoin
Coming out of this trance, I realized I was in some snake country pushing a bike with 100lbs of music equipment and camping gear and that I should probably just head back to the safe freeway where 18-wheelers pass you at 80mph at arm's length. 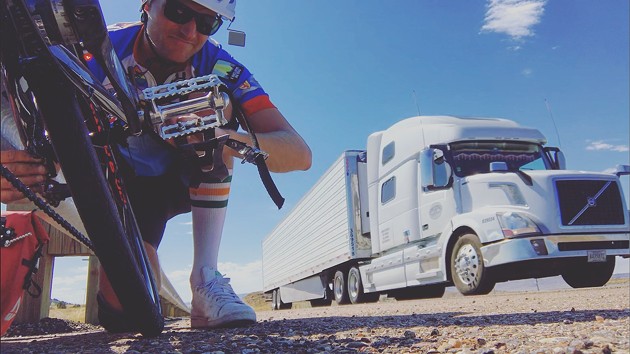 Rich Aucoin
Leaving Albuquerque, I routed passed the Whites' residence from Breaking Bad. Speaking of monoculture—for those who haven’t seen this super well-written show, it’s the best modern pop version of Greek Tragedy that I’ve seen (even though, as you watch it, you constantly question yourself: “am I enjoying this?”)—it’s definitely a worthwhile effort to get through empathetically. I’m not sure if it was because of how well the show is written that its fans became unreasonable with their visitation of this site, but they started to take small keepsakes from the property. There was also a scene where Walter throws a pizza on the roof and so began a rite of the worst kind of fans, re-enacting this with their own BYOP pranks.

The poor homeowners erected an intense-looking fence to thwart off these vandals and don’t seem that impressed by respectful visitors. I said I was sorry to hear about their troubles to one of the owners, who shoed me with their hand and then yelled “You think this is fun?” They proceeded to sit in the famous driveway just staring out into the world with this intense frustration. It might be just my take on it but I’m sure if they even just painted the house a different colour than what it was on the show, that would severely decimate the appeal in going to see it.

Rich Aucoin
Travelling on Route 66 has been really interesting, seeing first-hand the devastation of the classic American community. You can really understand Make America Great Again when you see these small towns desperately trying to hold onto what’s left of these once-booming tourist destinations. You can see old photographs of full streets of cars and people filling the streets to these now ghosted towns. Rich Aucoin
What does remain are some really nice folks trying to keep the past and themselves alive. If you stay at a lot of these classic motels instead of the big chains, you can see rooms and ice boxes and cars like it’s still the 1950s when these places were in their prime. Staying at these places feels like getting all the benefits of traveling back in time without losing the social progress of the present.

Rich Aucoin
The real culprit of these towns’ decline is capitalism’s bottom line, wanting faster roads and bypassing the old ones, cheaper cut-and-paste motels along these new freeways, the rise of flight travel and the decline of the Griswolds’ American road trip.

Scene & Heard: Your record of news to note from the Halifax music scene

Fall Arts Preview: Sit up and Let Dreams Be Noticed