“The Wave,” “The Motorcycle Salute,” or as I’ve heard it called, “The Drag” (my personal favourite): Defining the signal of acknowledgement between two two-wheeled travellers on the open road in North America. These waves, mostly between two motorcyclists and presumed to have originated between the most famous two motorcycles, William Harley and Arthur Davidson, occasionally are shared between motorized and non-motorized cyclists to express the understanding of their shared road dangers and commonalities.

While I don’t see many motorcyclists giving the road cyclist the wave—though it happens—a lot more of them are open to letting the long-distance cyclists into their ranks with a dropped hand offering of respect. It does feel very empowering to when a group of bikers cruises by you on a quiet lonely highway and the leader and pack all drop their hands out in recognition to which you drop a hand back as are the ways of the road.

I’ve gotten into the lush, wet and mountainous part of the trek.

Felt like Bart Simpson trying to find the excitement of the 1982 World’s Fair years too late in Knoxville, Tennessee.

Country roads take me home to the place where I belong, West Virginia, mountain mama! 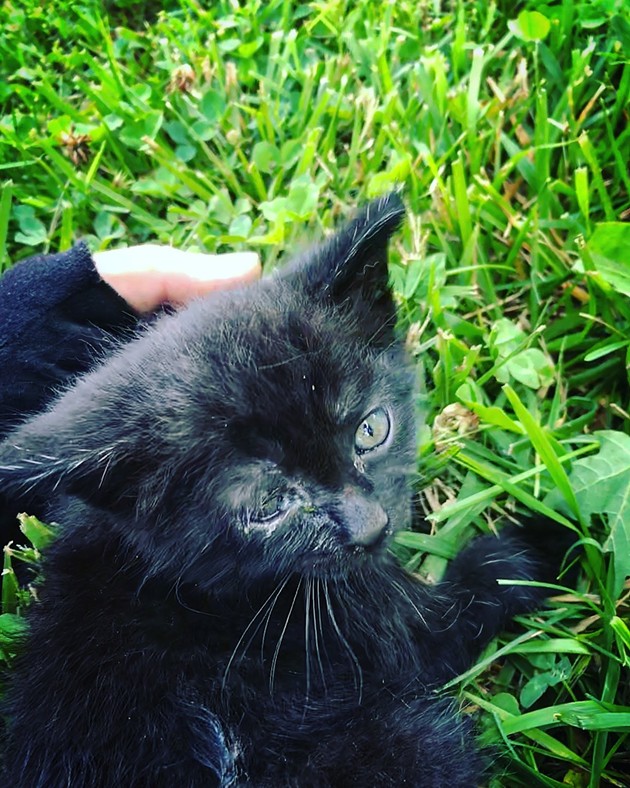 I saw something in the middle of the highway that turned out to be a kitten. I couldn’t figure out where it came from or how it got there but I ran out into the road and scooped it up before it could get run-over and checked the nearby houses for any answers. Finding no help (even from a police officer who stopped to make sure I was physically alright as I had flung by bike to the side of the road hastily), I put the kitten in my front bike basket and was proceeding to cycle him to the nearest animal shelter which I assumed was like our local SPCA back home but luckily got intercepted by some women in the road as well getting donations for their organization, Abandoned Angels Inc., they let me know it was more of a “kill shelter” because of the overpopulation of animals in the south and they said they’d help get the kitten its shots and find it a home so I handed the kitten over to them and continued on my route.

Biked by an abandoned asylum.

Stayed at supposedly haunted hotel reminiscent of The Overlook Hotel from The Shining.

Visited the 215-foot high naturally eroded bridge in Natural Bridge, Virginia. It was a sacred site of the Native American Monacan tribe, years later surveyed by a young George Washington and years later bought by Thomas Jefferson who called it “the most sublime of nature’s works.”

Visited one of the many caverns of the area. Was able to explore by flashlight because I was the only one visiting at the time so they bent the rules and turned off the lights for me.

Finished crossing the Appalachian mountains and enjoyed the longest downhill ride of the tour.