The dance pop king's new LP, United States, is a tie-dyed exploration of late capitalism and its decay. 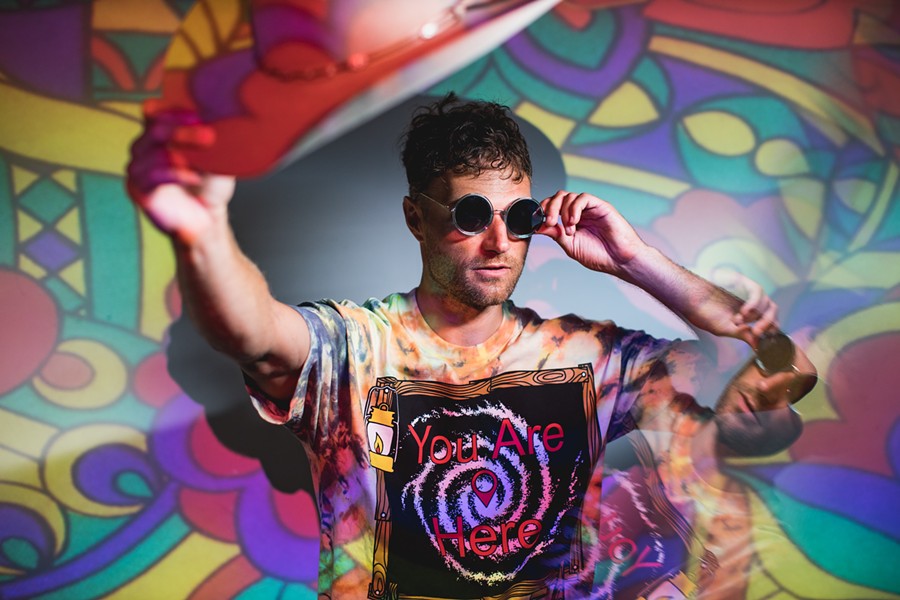 The opening notes of Rich Aucoin’s newest album—the oxygen-doused, psychedelic-streaked United States—sounds like the start of a movie: Close your eyes and you can see the screen rouse to life, a nameless city coming into focus. It’s morning and the sun sits just overtop the buildings, an egg yolk suspended in the sky. “Boarded up Main Street, only in the USA/Drivin’ on route 66, living in the new decay,” Aucoin sings, and you can feel an expression that’s equal parts smile and a grimace taking hold of Halifax’s electro-pop king’s voice.


You know the expression. It’s the same one you’ve been wearing for months now—maybe even longer. (How long has everything been terrible, anyway? Has this been what our faces have been doing since 2016?)


But today you can relax your jaw, let your chin hang slack. It will anyway, as your mouth falls open at Aucoin’s latest record—as he becomes the Willie Wonka to your Charlie Bucket, taking your hand (and your ears) through a tie-dyed exploration of late capitalism and its decay.


“Everything I’ve made to this point, I started by watching a movie and then composing a score to it,” Aucoin says, setting his coffee cup down on a patio table in early September. (His 2014 record *Ephemeral* was inspired by The Little Prince. Meanwhile, some of Aucoin’s earliest work was grounded in How The Grinch Stole Christmas—until a cease-and-desist from Dr. Seuss’s estate came crashing in.


“It needs to work on its own, but it needs to be heightened by this experience of playing them in sync,” he adds.


It’s one of the last hot days of summer, but Aucoin’s coffee isn’t iced. He’s sitting, ankles crossed, thinking about the latest movie that’s inspired him, the slow-boiling drama none of us can tear our eyes from: America and its lumbering decline.


“I knew I was gonna write a record while cycling across America two years ago,” he says. (At the time, he live-blogged the four-month, two-peddled journey on thecoast.ca.)


“I bet some people are going to be like ‘why is this Canadian coming in and why isn’t he worried about his own country’s shit?’.” But, he takes a breath and continues, “In my head I kind of defined the record half about psychedelics and meditative states as I do a calling to arms of activism and talking about these issues that are happening all over the world, through the viewpoint of the States.”


That is to say, the record is about our states of being, states of thought, states of cultural progress just as much—if not more—than it’s about Trump’s domain. (But, since Trump’s domain is also global in a sense, how could an album about today’s world not look heavily at the USA?)


“The goal is for it to look like late 1960s psychedelic—which I feel is very much the era we’re entering into, it feels like the summer of ’66 right now. And things are bubbling and ready to explode into a new era,” says Aucoin. This spine-tingling, something’s-gonna-happen-soon air shrouds United States’ 12 tracks.


Looking through the archived articles of Aucoin’s trip, you can see the album take shape, entry by entry. There are photos he snapped along the way: of anti-ICE protestors outside the White House (which would later be reworked into art for the single “Reset”); of swaths of desert Aucoin calls “the most isolated section of the country, [with] only snakes and birds and rolling desert dunes”; and of Aucoin himself, tired and elated at the end of his journey “finishing the ride through urban sprawl and vast industrial lands,” the Statue of Liberty winking behind his shoulder.

Aucoin is Ennio Morricone armed with a Korg and a decade-spanning set of samples. He’s Steven Spielberg with reverbed vocals. And you can listen along to his imageless movie, United States, laying out a montage in your mind’s eye.


He picks up his coffee and sets it down. “A friend of mine used to say ‘Oh, you’re hi fi-lo fi’,” he says, shifting in his seat on the patio. But, this new LP is firmly in the first camp, a streak-free magnifying glass honing in on influences that range from David Bowie to The Beatles. (Those looking for proof need go no further than the lead single “How It Breaks”, which layers Bowie’s ‘Young Americans” with The Beatles’ “A Day In The Life”. The track, Aucoin says, “played off this idea of reflecting on the past and adding to the broken telephone chain of storytelling and lineage.”)


He talks wistfully in a July 2018 blog post about how he’d hoped to have his own Forrest Gump moment: “When I had originally conceived on this tour after cycling across Canada in the same manner ... I had hoped to be at least moderately famous enough that I could do this tour differently, with fans and friends in tow in a Forrest Gump-like communal effort”—showing his cinematic sensibilities are close at hand, no matter what. (Aucoin would pass through Flagstaff on his bike, the only shared point on both his and Gump’s cross-country Odyssey.)


The album borne of the trek ends with the piano-driven “American Dream”: “Please try again is what they say because they need you to play,” Aucoin sings in a slowed-down twist on his usual brand of endorphin-fuelled rock. Perhaps his jaw is tired from clenching, too.


“I didn’t call the record America,” Aucoin says, coffee drained and sun lowering in the afternoon sky. The credits are about to roll—and you’re ready to hit ‘play’ again. He adds: “The intentional idea was it is called United States, so it was this universal connection we have to these states of consciousness, and leaning more into that and having fun with that that is the name of our neighbours to the south.”