Risk of collapse for student decks

One Halifax home inspector says the municipality is full of unsafe decks. 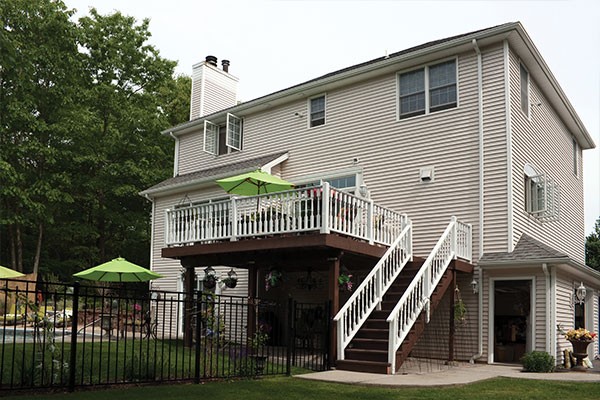 Thomas Baker was on his way home from a party with a friend when he heard a crash.

“I saw [the deck] when I arrived and thought it looked sketchy. It didn’t look good, so I hadn’t gone on it. When I heard the crash I instantly thought that it had fallen,” says Baker.

It was a party at 921 Brussels Street where a third-storey deck collapsed, sending six people to , one with a broken femur.

Although it’s been several years since the last high-profile deck collapse in Halifax, one local home inspector says that he sees unsafe decks “almost every day,” despite the municipality’s stringent inspection process.

“Everyone looks at decks as just pieces of wood and you assemble it together and what could go wrong,” says Lawrence Englehart of Global Property Inspections. “Unfortunately it ends up being a couple buddies, a few two-fours, and they put a deck together.”

In 2008, the municipality introduced added rules for deck inspection, building on national building code guidelines previously used. Englehart says it’s helped, but people circumventing the permit process, along with the constantly changing building code, means there are still many outdated and unsafe decks in the municipality.

“There are reasons things change and they change for all the right reasons,” says Englehart, “but the reality is it’s not logistically feasible to go back to every house and say, OK now it has to be up to standard.”

Currently, HRM requires a permit for any deck being built or renovated. According to Halifax spokesperson Victoria Martin, between 2013 and 2017 2,526 permits were issued to construct a deck, and 116 to renovate.

When a permit is issued, the deck is inspected at several stages during the construction. Once it passes final inspection, it’s the responsibility of the homeowner to maintain the deck and adhere to municipal bylaws.

According to the municipal auditor general’s report on building inspections in 2015, “HRM does not have a defined proactive process in place to identify cases where construction is occurring without a permit.”

Effectively, the municipality depends on a building official being in the area or a complaint from a neighbour to find deck construction taking place without a permit.

Martin says building officials routinely and proactively identify unsafe decks being built without permits by driving around the city.

“However, the Halifax Regional Municipality is a very large area and much of it is not densely populated,” adds Martin. “Our building officials don’t get to all areas of the municipality on a regular basis so our proactive approach, we cannot identify all unsafe decks and deck projects without permits.”

Englehart’s advice for tenants is simple: trust your instincts and rent from reputable companies.

“If something is well-kept, clean, it looks nice, that’s sometimes the easiest way,” he says. “It could be lipstick on a pig, but predominantly if something looks nice it’s been respected and well-maintained.”

If a tenant believes a deck is unsafe and the landlord refuses to have it repaired, they can report it to the municipality by calling 311.

WHAT TO LOOK FOR IN A DECK

How is it attached to the house?
The deck should be attached directly to the house, not drilled through the siding.

If you’re unsure, call a professional
If something doesn’t seem right call someone, or look at the HRM’s deck-building guide.

Back To School Back to School Housing