Pat LePoidevin stops off in Halifax on the Highway Houses tour. 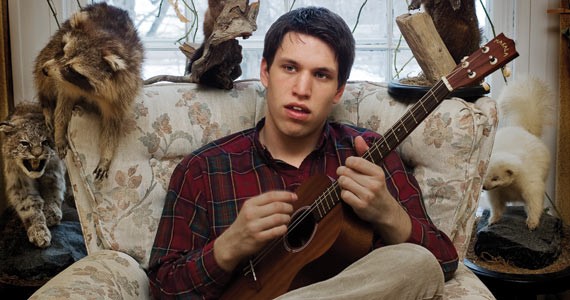 The 11 songs on Sackville-based raconteur Pat Le- Poidevin's third album Highway Houses piece together like patches on a traveller's backpack, telling stories from his journey to Dawson City and back.

Last April, LePoidevin and drummer Matt Sarty headed out on a 30-date tour, with their sights set on a summer in the Yukon. Driving across the country, LePoidevin was intrigued by roadside real estate. "The whole force behind this album is how many houses I see along the Number One, how many people actually live on the highway," he says.

Experiences like living with a 91-year-old Dawson-born gold miner or in a trailer on the most northern green golf course in the world fuelled LePoidevin's songwriting blaze. The result is a collection of stories inspired by the trip, bookended by songs that tell the fictional story of a highway-dwelling family with a father hungry for the wilderness.

But it wasn't just the stories that were monumental to the record's sound. At a second-hand shop in Ontario, LePoidevin discovered a "perfectly out-of-tune" air organ that became the base of the album's instrumentation. "For some reason I couldn't get rid of it," he says. "That was sort of a project, to end its suffering."

A century-old community hall in the tiny village of Parkindale, New Brunswick, piqued LePoidevin's ear. Months later, he and engineer Nick Battist moved themselves into the hall to record. "Because of the sound technology that we have, we can now use these amazing spaces...I thought that it fit the stage really well for these songs that were sort of written in the middle of nowhere."

Next it's back to the wilderness for LePoidevin. He'll drive to Dawson to retrieve Sarty, then tour along the Trans-Canada back to Sackville.