Robie Street frat house has a history with sexual assault

Phi Kappa Pi address was the site of an alleged assault this past month, and another four years ago. 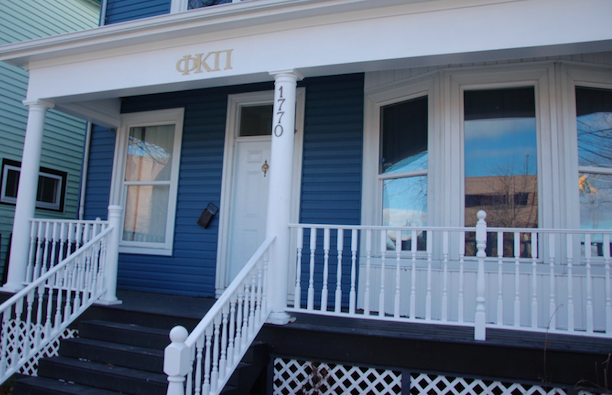 A frat house believed to be the site of a sexual assault earlier this month was the location of a previous rape investigation by police in 2012.

On March 27, 2012, Halifax Regional Police were contacted by a 21-year-old woman alleging she was sexually assaulted the previous October at 1770 Robie Street. No charges were laid.

“Through the course of the investigation it was at the request of the victim not to proceed with charges,” Halifax Regional Police spokesperson Dianne Woodworth writes in an email.

The Robie Street address is a multi-unit dwelling housing the Phi Kappa Pi fraternity, and the site of another alleged sexual assault that’s recently been in the news.

Woodworth confirms HRP were contacted this fall, in the early morning hours of November 1, to assist a citizen who disclosed she had been sexually assaulted earlier that night.

“We’ve determined that the reported sexual assault took place at an address in the 1700 block of Robie Street,” writes Woodworth.

A member of the Halifax Nova Scotia Anonymous group, which has been working with the victim’s family, confirmed in a phone call to The Coast that the location of this most-recent alleged assault was the Robie Street fraternity.

In the days after the alleged assault took place, local members of the Anonymous group released details about the incident in an online video that named the alleged perpetrator and displayed his photos and phone number.

Police had ended any investigation into the Halloween-night sexual assault, stating the woman involved had declined to proceed. Comments under the Anonymous video appear to have prompted HRP to once more reach out to the victim and reopen the case.

It should go without saying that no allegations in this recent case or the 2012 sexual assault claim have been tested in court.

According to the international fraternity’s website, the Halifax chapter of Phi Kappa Pi was founded in 1923 as the first frat at Dalhousie University. It adopted its Greek name in 1959. Phi Kappa Pi accepts students from Mount Saint Vincent, Dalhousie and Saint Mary’s universities.

Dalhousie, like other universities, doesn’t have any direct affiliation with sororities and fraternities. The Greek organizations aren’t registered societies on their own. Instead, they operate collectively under the Halifax Greek Council, which at Dalhousie is managed by the Student Union.

Evan Hallward, then-president of the Halifax Greek Council, told the Dalhousie Gazette at the time that those allegations “created a divide where fraternities are the bad guys. It puts the word ‘fraternity’ in a negative light, even when the report doesn’t necessarily mirror what we do out here in Halifax.”

Another fraternity member belonging to Sigma Chi told the Chronicle Herald’s Selena Ross that he found the report’s allegations “disheartening,” and that his frat makes special efforts to educate members about sexual assault.

“The frat ensures girls at their parties have safe rides home, and they hire professional security staff and appoint certain members to stay sober and keep a careful eye on the party,” reported Ross.

The StudentsNS report found that most sexual assaults happen in the first two months of the school year and only about five percent of assaults are formally reported.