The new joint offers sushi of a different kind for people on-the-go. 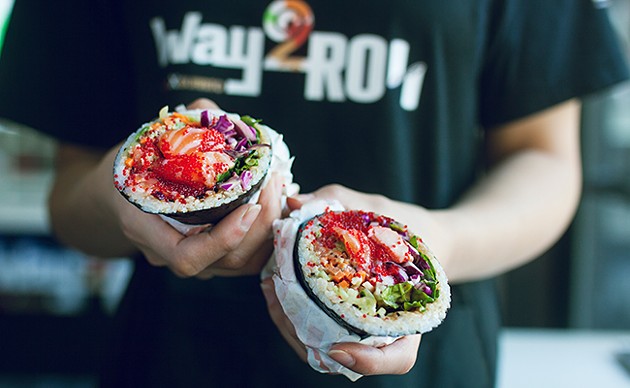 The trend of so-called sushi burritos has hit Halifax. Way 2 Roll (1480 Brenton Street) is aimed at sushi lovers who don't always have time to sit down with three different rolls and a bowl of miso.

Sushi burritos have already been popularized in Toronto and New York, and Leanne Li thought they had the potential to catch on locally. On top of that, there are plenty of resources for seafood.

"We get our fish almost like, daily from fishermen's markets," says Li, Way 2 Roll's manager and one of four business partners. "So everything's super fresh."

According to Li, Way 2 Roll's location has been a prime spot, thanks to its proximity to Spring Garden Road. Between its soft opening on June 11 and its grand opening on the 29th, the place has been busy. "Spring Garden is really the heart of Halifax and it's by students from SMU, Dal and all the young professionals nearby as well," she says.

The sushi burritos are basically gigantic sushi rolls. For a more relaxed meal, burrito bowls are also available. So far, Li says the wasabi salmon burrito has been popular: Salmon, crab, veggies and tempura topped with wasabi mayo and teriyaki sauce. There are also more burrito-like fillings on offer, such as chipotle chicken, beef and—yes—donair meat.