Get those pistons pumping–and those goods moving–with a trailer for your bike, available as of this week through HFX Trailer Share. 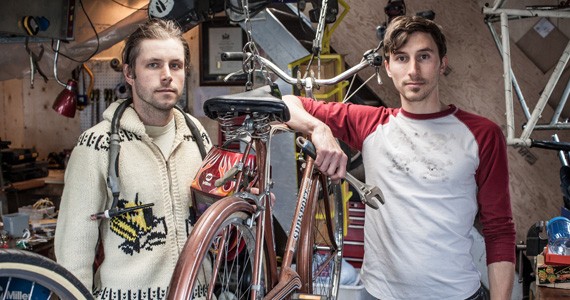 "We have metal-working equipment, safety equipment, welding machines." Tom MacDonald is showing me around his workshop. "It's essentially a bunch of bikes that have been stripped down for parts, and the good parts survive and the bad parts we chop up and make into cool creations."

MacDonald is the coordinator of the HFX Trailer Share project, based out of the Ecology Action Centre, and these "cool creations" are bike trailers. A couple of years ago, MacDonald and fellow bike-guy Alex Tremblay realized that there was a need in Halifax for cargo bikes.

"A cargo bike," Tom explains, "is a bike that's designed specifically to carry large amounts of weight so that it's comfortable, safe to ride, and also useful for bigger jobs, like if you wanted to pick up a couch, say, on your bike."

Halifax has a thriving cycling culture but people are mostly transporting themselves. MacDonald and Tremblay realized that some people wanted to be able to transport their stuff too. So they started hosting trailer- building workshops. "We would host folks who wanted to learn how to build trailers," says MacDonald, "sort of learning ourselves as we went."

The business expanded from there and is now called BikeWrights. The pair has built trailers for a variety of small businesses and now they are building the trailers for HFX Trailer Share. The idea is that for an annual membership fee of $25 you will gain access to a small fleet of trailers that will be located around the city. "You're going to be be able to go online," MacDonald says, "check where the nearest trailer is or where all the trailers are if you want. And then you can go to the trailer, unlock it and start using it. And lock it up wherever you want as long as it's in Metro Halifax."

On his desk MacDonald has the guts of the circuitry panel that will become the locking/GPS system for the trailers. His background is in engineering and he takes a lot of pride in building these systems from the ground up. "Even before I went to engineering school I always wanted to be an inventor," he says, "and now I am kind of using all that knowledge that I gained through engineering and applying it."

The trailers themselves were designed through consultation with the public. The winning designs are named The Tote, The Commuter and The Bucket. The Bucket will be launched as a sort of beta-tester during Bike Week.

It looks like an old Airstream trailer from the 1950s, sleek and aluminum. MacDonald is hoping people will get on board this cargo-bike revolution. To those who don't think they can carry a load, he says: "You can carry a lot more than you think you can because your legs are pistons," he says. "Put the pedal to the metal!"

Take a ride with Roundabout Bicycles

Pump it up at Halifax Bike Week

It's a banner year for Halifax Bike Week