Tabrizi Rugs has had you (and your floor) covered for 30 years. 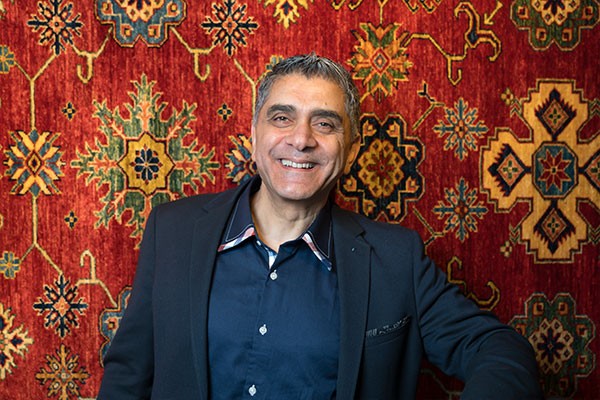 "This is the trendy stuff today," says Jafar Tabrizi, gesturing to a grey and white rug in his shop, Tabrizi Rugs, on the Bedford Highway. "This is silky material—look at that. Feel it."

It's one of many hanging up on the walls, while plenty more are stacked on the floor. Some are machine-made, others are crafted by hand, which Tabrizi himself prefers. All the colours and patterns are mesmerizing, so if you don't pay attention you'll almost certainly walk right into one of the stacks.

Tabrizi Rugs started off as a family business in Iran back in 1927. "I grew up with it," says Tabrizi, who left his home country for Toronto when he was a teenager. He came alone, but he brought his desire to do business and his institutional knowledge with him. As a result, he started a Canada-based version of Tabrizi Rugs. That was 30 years ago.

"We just did roadshows twice a year," says Tabrizi. "When I was in Halifax, I really, really liked it. I loved it here."

It was only a matter of time before Tabrizi made the move to Nova Scotia. He started a mostly wholesale venture in Burnside and later started looking for a storefront. Tabrizi's first choices were downtown Halifax or Quinpool Road, but he realized those locations didn't make sense.

"Customers—they come in, they want to stay for an hour. Sometimes two hours. So we really needed a place with lots of parking," he explains.

While many other businesses have come and gone along this particular stretch of the Bedford Highway, Tabrizi Rugs has been a constant since 1992. "We keep growing and growing," says Tabrizi. "I keep knocking down the walls for the next unit, and the next unit."

If the lasting power of his business is any indication, shoppers aren't scared away by the prices. Not only does Tabrizi say he has regular clients, but he claims people travel from all over the Maritimes to visit the shop. "We are not cheap," he admits. While Tabrizi shows off pieces that go for around $150, he also has rugs that cost thousands—such as the one in his office.

But there are good reasons for that.

"Tabrizi's known for quality," in part because he goes directly to the source himself.

"No matter what kind of rug it is, it has to be my standard. It has to," he says. "You buy my 30 years of experience when you buy a rug from me."